Whether or not there’s a lot of competition in the market for yurts—circular bentwood frame dwellings that originate in Central Asia—Rogers is nonetheless carving himself a very particular niche. Clean Air Yurts feature non-toxic, acrylic-coated polyester coverings that are more durable than treated cotton canvas, and more environmentally friendly than the vinyl and PVC coated covers other manufacturers use. “Vinyl is cheap, available and durable, but it breaks down and leeches harmful chemicals into the environment,” explained Rogers, who works out of his shop on Crispell Lane. “In the grand scheme of things, doing what’s right for the world is most important, not what’s right for the pocketbook.”

After graduating college, Rogers “unofficially” studied architecture and began designing homes. He built his first house for a member of his extended family and then designed and built a zero-VOC (volatile organic compound) and super insulated timber frame home for his parents, Anne and Dave Rogers. 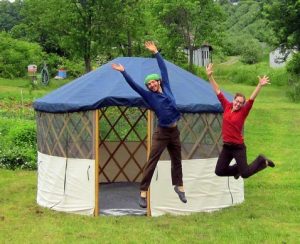 Rogers was building his first yurt using conventional materials when he realized that there was a lot of room for improvement, both in the way existing companies design and build their products and in the way they conduct their business. He spent the better part of a year researching materials and developing a prototype for portable yurts in a range of sizes that are as lightweight as possible—one with a 10’ diameter weighs about 50 pounds. Compared with square tents, Clean Air Yurts are structurally stronger and offer an aesthetically pleasing space that can serve a variety of functions.

“They can be used for camping, a display booth, or for an event, and they’re easy to set up, carry, load in a car, or pack away in a garage,” Rogers said. “Yurts don’t replace houses, but offer an alternative to people who need a good sturdy design for a temporary structure that can be used again and again. And I’ve learned from my customers that the round shape is meditative, with better feng shui.”