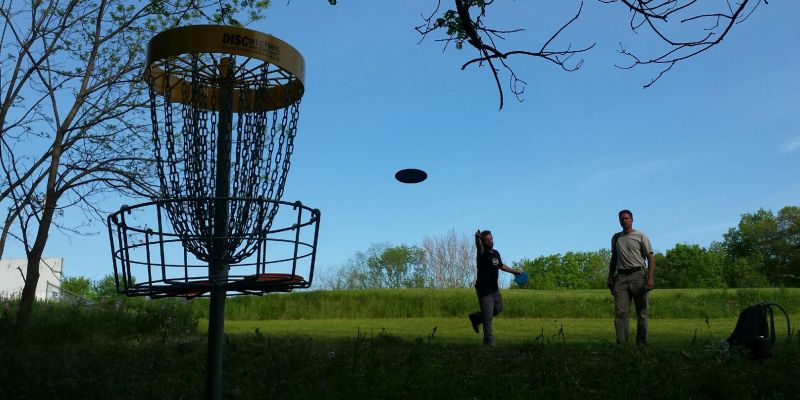 Disc Golf In Majestic Park: The Only Public Course For Miles

It was the possibility of playing disc golf in his hometown that inspired Brian Hauser to approach the Parks and Rec Committee for permission to build a course in Majestic Park. With the help of new committee member, Andy Lewis, and some generous local businesses, Majestic Park is now home to the first municipal disc golf course in Ulster County, and the only public course within 45 minutes.

For the unititiated, Disc Golf is a game in which players throw a 10 inch Frisbee at a target, attempting to traverse the course in the fewest number of throws. Between the years 2000 and 2008 the number of disc golf courses doubled; the game  is now played in 40 countries.

Course construction was facilitated by the New Paltz Foundation, which became steward of the funds raised after then Supervisor Carl Zatz and the Parks and Rec Committee signed off on the project. The Mountain Brauhaus, Ulster Savings Bank, BeeLine Movers, Tantillo Landscaping, Hudson Valley CPA’s of New Paltz and Thruway Sporting Goods of Walden participated.  A private donor, Eric Judson, who has a small son and wanted to see improvements to the park, also responded to the appeal. The group raised a total of $8,100, with a bit more still needed for final touches.

“Pretty much every free minute I had went into it,” Brian explains. “I really couldn’t have done it without Andy Lewis and the help of 15 volunteers from Gardiner, New Paltz and surrounding areas.  Andy was out there helping design, raise money and round up volunteers from the start. I think the hardest part was trying to hold him back the whole time,” Brian adds.

The 18-hole, mid-level course meanders through the outskirts of the park and is suitable for all ages, including Brian’s five and seven year old sons.  On Sundays, anywhere from four to 16 people show up at 10 A.M. for doubles play.

Brian was excited, one day last summer, to see active use of the course for the first time. “There were a few families, groups of friends, and a couple of Dads were actually pushing all-terrain strollers with their kids so they could play.”  He has also encountered people from as far as Beacon, Danbury and Rochester. “ This is a new park addition that not only lets locals get out to enjoy a fun game while enjoying the beautiful views of the Gunks and Wallkill River, but also benefits business in the Hamlet and surrounding areas,” Brian notes.

Brian is now Chair of a newly constituted Parks and Rec Committee, and the disc golf course led to a renewed enthusiasm for a list of other needed improvements. Now, Ellie Gardner (the only remaining member from the committee chaired for many years by Mike Gagliardi) along with Brian, Andy Lewis, George Devine, Michele Tomasicchio, Joshua Platt and Claudia Pulgarin, bring together their expertise and ideas to repairing the badly deteriorating park pavilion and finishing construction on the pole barn (using a repurposed $50,000 grant procured by former Supervisor Carl Zatz). The barn is currently used in bad weather for Gardiner summer campers, but it still needs bathroom stalls, a kitchen space, insulation and a heat source that will allow it to be rented out in all seasons, making it a potential revenue source.

Members of the committee also envision soccer fields behind the pole barn and better playground accommodations for two to three year olds, something Brain felt was lacking when his boys were younger.  And the recent suggestion of a skating rink is, evidently, not  a new idea;  Brian found a note in very old Park and Rec minutes mentioning where equipment for the “new skating rink” was stored!

Hiking and biking trails below the transfer station and a boat launch have been suggested. And, of course, architect Kim Hoover’s amphitheater in the park remains on the wish list. Hopefully, the new subdivision law that asks developers to donate money for parks rather than donating mostly unusable “parkland,” will help provide some of the funds needed to turn these ideas into reality. Parks and Rec operates on a tight budget: $17,200 for maintenance, including mowing, garbage removal, electricity, Gardiner Day expenses and repairs. With that in mind, Brian plans to organize a disc golf tournament every year to raise money.

If you have any ideas for fund raising or want to add to the Parks and Rec Committee wish list or volunteer, contact Brian Hauser @ bch227@yahoo.com.