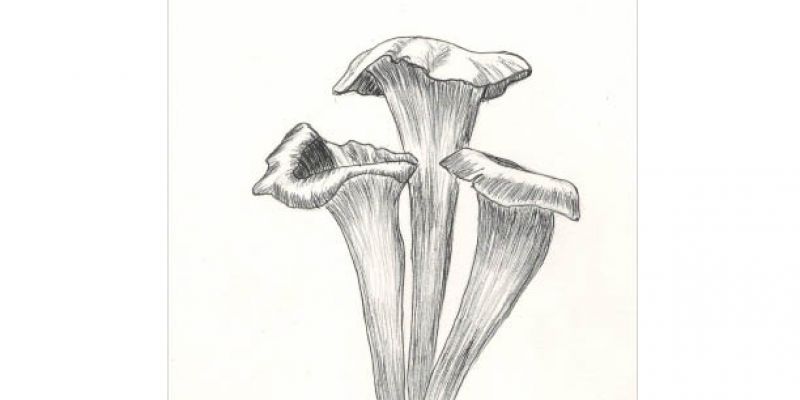 A Wet Summer, A Rich Bounty of Mushrooms

People start mushroom hunting for different reasons, but they often begin after discovering that wild mushrooms can be absolutely delicious. With much more flavor than the store-bought variety, edible mushrooms can often be found growing in the woods, free for the taking. It’s a wild food that is either difficult or impossible to buy.

First, get a good field guide, study it, and learn to identify the mushrooms you find.

I’ve been gathering edible mushrooms for a few years now, and I’m still not ready to eat a gilled mushroom picked from the wild. Even if I’m “pretty sure” it’s edible, pretty sure isn’t quite good enough.

Edible Mushrooms: Lest I frighten people with the dangers of poisonous mushrooms, rest assured that it’s easy to find safe, edible mushrooms. It turns out that many of the most desirable edible mushrooms are easy to identify. They do not have gills, and do not have any look-alikes.

The Foolproof Four:  Many people abide by the foolproof four. That is, only eat: Giant puffballs (Calvatia gigantea); Chicken of the woods aka sulphur shelf (Laetiporus sulphureus); Morels (Morchella sp.) or Chanterelles (Cantharellus sp.)

Mushrooms tend to have their seasons. Late summer or early fall is a good time to go hunting for some “choice edible” mushrooms such as Hen of the woods aka maitake (Grifola frondosa) and Chicken of the woods, mentioned above in the foolproof four. Both of these are easy to identify and quite delicious. With all the rain this past summer, it turned into an exceptional mushroom season.

Mushroom hunters often have their “secret” harvest spots (I could tell you where it is but then…) which they return to year after year. Last year I discovered chanterelles in my woods. This year I was able to return to that same spot and collect a few pounds over a few weeks. Last night we had chanterelles cooked with butter, garlic & wine—delicious!

Soon after, I went out for another chanterelle harvest and literally stepped into a patch of black trumpets, the most invisible edible of all. A black trumpet can look like a hole in the ground or a crumpled leaf. I had never seen one before. Black trumpets are another safe choice edible; they have no poisonous look-alikes. I cooked mine in butter. Yum.

Mushrooming for fun: Foraging for these delectable edibles is another entrée into the natural world, like birding or hiking or hunting. And there’s the challenge of the hunt—trying to find that same mushroom year after year. You may have found them in previous years, but not this year and so, wonder, “Am I in the right spot? Is my timing off? Is it too dry?”

There’s the surprise of finding something new along a familiar route. Mushrooms can pop up seemingly overnight; not like a tree or bush which looks pretty much the same as it did yesterday.

And the beauty… A walk in the woods, especially after a wet spell, can reveal a carpet of strange colors and weird shapes as fresh mushrooms emerge from the floor. One week I started seeing tiny crimson chanterelles cover the slopes, along with lavender “tooth” mushrooms.

Recommended mushroom books: In 2011 I took a popular mushroom class at the New York Botanical Garden, taught by Gary Lincoff, not realizing at the time that he was the east coast mushroom authority.  His National Audubon Society Field Guide to Mushrooms, 1981, is the best eastern field guide, and his 2017 The Complete Mushroom Hunter is a great guide with excellent poisonous mushroom information. Lincoff died earlier this year at the age of 75, still teaching and writing about mushrooms. The New York Times obituary refers to him as the “pied piper of mushrooms.”

Mycophilia (Eugenia Bone, 2013) is a great read about the wonderful world of mushrooms, and The Mushroom Hunters (Langdon Cook, 2013) reveals the fascinating subculture of commercial mushroom pickers. All That the Rain Promises and More (David Arora, 1991) is a good field guide for the west, and Mushrooms Demystified (David Arora, 1986) is a really big book that answers lots of questions. Finally, don’t miss Mycelium Running (Paul Stamets, 2005) about how mushrooms can save the world.  Happy hunting.