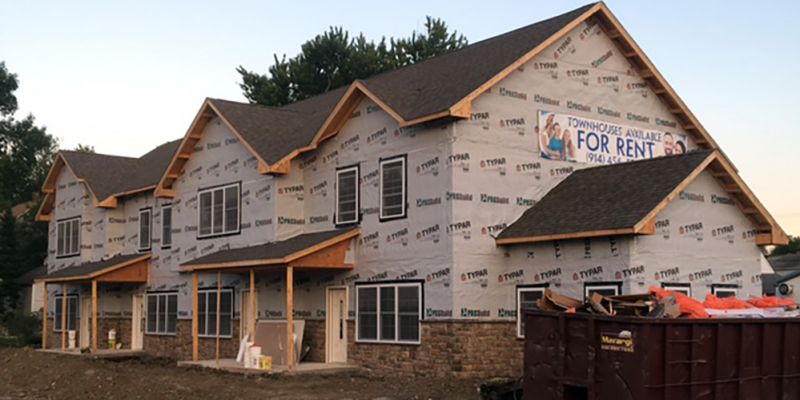 If you have noticed the new construction sites on Milk and Second Streets, you will recognize that the Hamlet of Gardiner is growing.  Where there was once a field and a trailer, there is now, on three quarters of an acre, a foundation and a two story building still under construction. (Another poured foundation, further up Second Street, is unrelated to this project and will be the subject of a future article.)

The two story building, located on Milk Street, will become four town houses, each with separate entrances in the front and back, separated from each other with judiciously placed walls. So far, the building is up, the roof, windows and doors are in place and 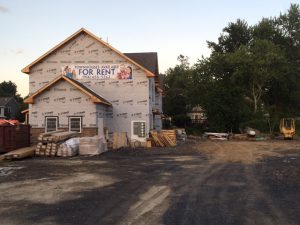 the stone work around the base of the building has been completed. The siding has yet to be added, but it will match the character of the town according to the developer, Sal Acampora.

At the time of this writing, the interiors are sheet rocked and serving as storage locations for cabinets, doors, and other elements of new construction.  Sal, a resident of Plattekill, is already looking for tenants for the town houses, which he expects to be completed by mid September. He is proud of what he is building since “Gardiner is a beautiful town, and I am honored to be able to do something for the town.”

When the town houses are rented, Sal will move on to his other project—the commercial building. Located on Second Street, around the corner from the town houses, it will be about 4,800 square feet, half of it on the first floor and half on the second.

He has not made decisions on all the aspects of this particular building since he has no tenants, and he wants to create a building that suits the businesses or offices that want to move in.  There will be curbside and off street parking, and plenty of retail or office space for the tenants, who will have offices just a short walk from Main Street as it goes through Gardiner.