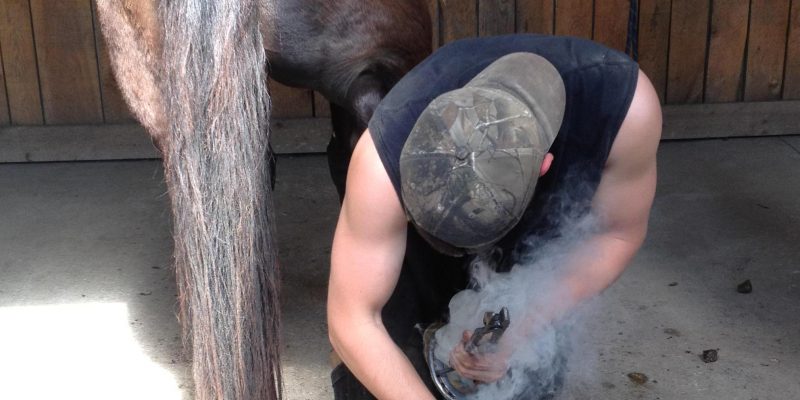 “A lot of people ask me what I do.  I say I’m going to school to be a farrier.”  “You drive boats?” they ask. Or, even better, this explanation to a group of girls, “I shoe horses.”  “YOU SHOOT HORSES?” Mike Mosher (left, in the steamy process of shoeing) says it’s easier to just say he’s going to be a blacksmith as most people seem to know that term.   He returned last summer from a 36- week course at Kentucky Horse Shoeing School in Lexington, Kentucky, which he regards as the best school of its type in the country.

Mike (son of Gardiner Town Clerk Michelle Mosher and her husband, Scott) graduated from Wallkill High School, did a brief stint in criminal justice at Ulster Community College while also working at the Mohonk Mountain House before working as a farmhand at Majestic View Farm. There, he concluded that hands-on work was the thing for him, and horses in particular.  He doesn’t care to ride them, much as he loves them; he feels more comfortable underneath!

Mike’s course was divided into three 12-week sessions, the first involving learning to use tools effectively as well as a gas forge, shoe modification, plus the practical work of his class—trimming the hooves of 1,000 horses per week.  He has worked with everything from miniature ponies to draft horses. The second 12-week period featured handmade shoes, a coke forge (more efficient than gas; heats faster) and anatomy lectures.  In the third 12-week session Mike learned how to make different types of shoes.  From the beginning Mike and his fellow students, numbering about 14, were learning from a freezer of cadaver horse legs, which Mike says could be “nasty, hairy and stinky,” particularly if you forgot and left them out overnight, in which case they were “disgusting” by morning.

A farrier or blacksmith’s job is physically demanding.  The job is especially tough on the back and hips, for which he does regular exercises.  “Control your back and don’t hit cold steel” is his warning—hitting cold steel reverberates in elbow and ears. Slag burns are another problem and Mike has bruised arms to prove it. Interestingly, about half of the students in Mike’s class were women.  A shorter stature is an advantage!

Certification by the American Farrier Association is not required in order to be a farrier (unlike the stringent requirements in Europe). Mike, however, has chosen to continue his farrier education. As an exemplary student, he was given high recommendations by his school in Kentucky and plans to do a year or longer apprenticeship. He considered going to Colorado, where he would have gained experience with western horses hooves;  they can be very dry and rock hard and don’t grow as fast as those of eastern horses, whose hooves are softer and easier to trim. Instead, however, Mike is heading for the Nashville area of Tennessee. There, he will be working under a certified journeyman farrier. Mike imagines his new mentor will “work me like a dog, prepare me for the job, and train me to be the best that I can be.”  So, will Mike return to the Hudson Valley when he finishes his training?  Even he doesn’t know …