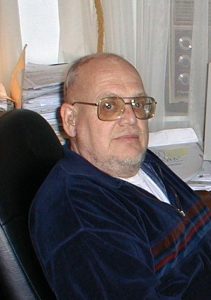 A recent photo of Leroy Carlson.

There is an old Yiddish expression: “Man plans and God laughs.” The coronavirus pandemic changed the world almost overnight, and the first Addison Gardiner birthday celebration, which was to have taken place on March 19th of this year, had to be postponed.

More later on the celebration for Addison Gardiner, but while researching and planning for the birthday, I discovered a very interesting piece of local information: former Town Supervisor Leroy Carlson is actually a distant relative of Addison Gardiner’s!

This is, therefore, a story of two men: Leroy Carlson, a long-time, very involved resident of Gardiner, and Addison Gardiner, that prominent New Yorker who lived most of his life in the city of Rochester and never visited our town even though it is named for him.

Leroy arrived in Gardiner in 1963 after graduating from Cornell University. He worked as a SUNY New Paltz administrator and was a volunteer member of the Gardiner Parks and Recreation Committee, which leased the swimming pool at the old summer “Wallkill Camp” on Albany Post Road. When the pool closed, the Town, then led by Supervisor George Majestic, created Majestic Park.

Leroy retired from SUNY in 1995 and soon after, was elected Gardiner Town Supervisor. He was later reelected for a second term but stepped down; in his view, the town was changing as many new people moved in. He also served our town as an EMT in the Gardiner Fire Department and as the last president of the Rescue Squad, which was then absorbed into the fire department.

In retirement, Leroy has become a genealogist. He traced his mother’s family roots back as far as the 7th century, to a Viking, found about 20,000 relatives, and has done much research into the Gardiner family (at times spelled “Gardner”). Specifically, he researched Thomas Gardner (b.1618 in England), his common ancestor with Addison Gardiner, and discovered that he is Addison Gardiner’s 4th cousin, six times removed.

Leroy explained, “Thomas Gardner had several sons. One began a line which led to Addison, and another line led to me. My family goes through Grace Gardner (b. 1707). She married into the Towne family, a very early family in Massachusetts involved with, among other things, the witch trials of Salem.”

Grace’s son Archelaus and his son, Archelaus Jr., fought at the battles of Bunker Hill, Bennington, and Saratoga. As a scout, Archelaus Sr. was instrumental in defeating the British by monitoring their movement from Canada down to Saratoga. He is buried across the river in Fishkill on the historic grounds near the intersection of I-84 and Route 9 which is, according to many, the largest Revolutionary War burial ground in New York State.

Sometime after the American Revolution, Addison and his family moved from New England to Rochester, New York. Addison’s grandfather, Issac Gardner of Brookline, MA, “was one of His Majesty’s justices of the peace in colonial times” according to a genealogical text “who was killed at the beginning of the Revolution.”

Addison clearly had law in his genetic past. He himself had a prominent career in New York where he began practicing law in Rochester in 1822. He was the city’s first justice of the peace. In 1825 he was appointed the first district attorney for Monroe County, and he did this job so well that he was then appointed circuit judge of five counties by then-Governor Throop.

In November 1844, he was elected lieutenant governor on the Democratic line, alongside Whig Party candidate Governor Silas Wright. Later, he became a judge on the newly revised NYS Court of Appeals where he served from 1847 to 1855. Prior to his 60th birthday, he retired from the judgeship and returned to his farm and law practice in Rochester.

When asked why the town of Gardiner was created, Leroy explained that, “In 1853, the area was growing, and it was a busy place, one of the fastest growing areas. They decided it was so large that they needed to split it off. Gardiner was created from the towns of Plattekill, New Paltz, and Rochester.” You are probably also wondering why this new town was named after Addison Gardiner.  According to Leroy, “It was political payback, probably for a favor.”

The celebration for Leroy’s 4th cousin, six times removed has not been forgotten. Planning for Addison Gardiner Day began in December, 2019, when it became clear that almost nobody knew anything about who our town was named for. A number of folks offered their help, including Town Supervisor Marybeth Majestic, Town Historian A.J. Schenkman, and Gardiner Day Committee chairperson, Suger Rowinski.

Gardiner Liquid Mercantile seemed to be the ideal location for this first event.  It is in the hamlet, is a decent size, has a good menu and wonderful staff, and Gable Erenzo, its owner, was incredibly helpful in planning the event. I recruited an actor friend, borrowed a period costume for him (he was going to “be” Addison) and everything was falling into place for an evening of good cheer and community spirit. I even recruited a graphic artist, Joe Tantillo, to create a graphic for the event.

And then God laughed. When the pandemic is past and things return to some semblance of normal, we will probably all need a celebration. I’m sure Addison Gardiner would be quite happy to have a belated birthday this year.