For those who didn’t know, Gardiner Day this year was held in the hamlet instead of in Majestic Park. Billed as a “Block Party,” the change in venue injected it with an amazing amount of new energy. 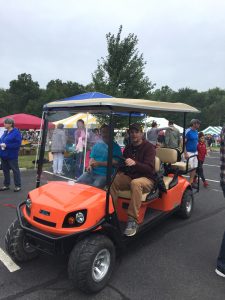 The event was dedicated to Carol Ann Majestic Lohrman, one of the original Gardiner Day committee members, who passed away recently. It was a fitting tribute. There were the usual face painting and great food vendors (in the Town Hall parking lot), as well as the Country Living tent, karate and other demonstrations, and a band, (in Moran Field), while another band and a wonderful array of artisans, wine makers and other vendors thickly populated Station Square.

The big differences, though, were our shopkeepers participating in the event, people strolling with their kids and their dogs (not allowed in Majestic Park), people stopping for a beer at Cafe Mio’s outdoor beer garden (also not allowed in Majectic Park), and the ability to stroll in and out of the shops. (My hair cutter is moving away and I found a new one, simply because the door of the Hair Chalet was invitingly open.)

There was even a shuttle to get you from one end of town to the other, and crossing guards to keep us all safe while we devoted ourselves to every indulgence!

Some of us, who shall remain nameless, may actually have skipped Gardiner Day for the last few years, but if it’s in the Hamlet next year, “we” won’t be doing that again.