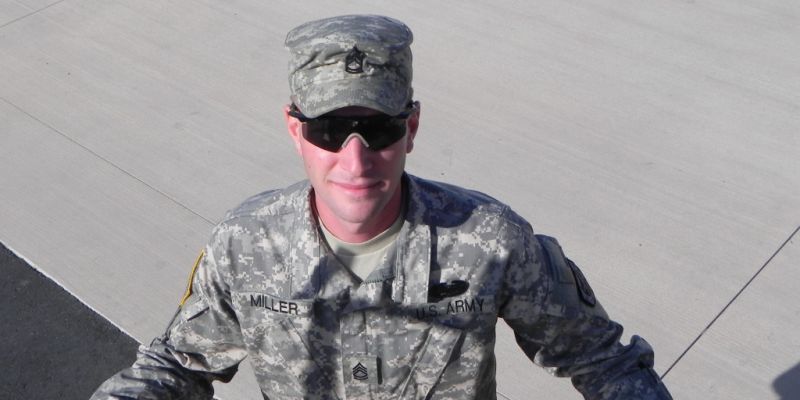 Gardiner Family Makes A Career Of The Military

“. . . [Sergeant First Class James R. Miller] aided his platoon leader in maneuvering the tank platoon deep into an enemy engagement area and decisively engaged and destroyed enemy BMPs [infantry fighting vehicles] and dismounts. During battle he never showed a concern for his life, but for those who trailed him.”  From the Bronze Star Medal citation for then Sergeant First Class Jim Miller, a medal he won in the 1991 Gulf War. 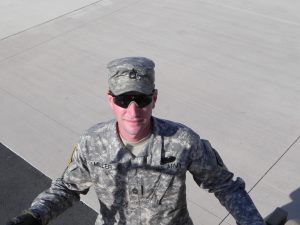 Sergeant First Class Jimmy Miller. Both his grandfathers served; both his parents served; his sister serves; and he and his sister would each encourage their children to do the same.
Photo courtesy the Miller family. For more pictures of the Millers visit our facebook page.

The military draft ended in 1973, resulting in an all volunteer military. Today, only about 1% of the United States population is in military service, but the James Miller family of Bruynswick Road in Gardiner defies national averages: 100% of its members are in or have been in the service. Jim Miller comments, “I think the draft was something that never should have faded out. It gave people a good set of base values to build off of . . . to realize what was right and what was wrong and the country was better for it. It just made you realize how much you took for granted.”

A Gardiner native, Jim enlisted in the Army right out of high school. That was not surprising; his father, also James Miller, drafted into the Army in 1952, served two years, but Jim also grew up hearing stories from uncles who served in World War II. “Everybody in my family had served,” he said. “We’re going to give this a shot.”

After enlisting Jim served in various posts in the U.S., in Korea, in Germany and in the first Gulf War. Lastly, he was at West Point and retired after twenty years in the U. S. Army as a Master Sergeant, Armor, M1 Abrams tank platoon sergeant.

Jim’s wife, then Kathy Day, grew up in Wallkill. Her father, William Day, enlisted in the Army in 1948, when he was 18 years old, and served 20 years.  He retired in 1968. So, again, is it any surprise that Kathy was an army reservist for seven years, trained as a combat medic?

Though they lived nearby, she and Jim did not meet until they were in the military. After marriage and deployment to Germany, Kathy’s rank was Sp4 when she joined the inactive reserve.  As army brats, Jim and Kathy’s two children, Jimmy, 27, and Megan, 25, absorbed the military life from the atmosphere.  Just a teenager when Jim retired from the Army, Jimmy had been taken under the wing of the West Point scuba team, among other things. Like his father, Jimmy joined the Army after high school. As Kathy says, “He grew up in the Army.”

Jimmy served two tours in Iraq and is married to Theresa Kenny from Wallkill. As a Sergeant First Class now based at Fort Carson, CO, he holds a Master Gunner’s Badge and serves as an M1 Abrams tank platoon sergeant. The Abrams is the Army’s and the Marines’ main battle tank, weighing nearly 70 tons with a replacement cost of $4,300,000 each.

Jimmy’s sister Megan graduated from SUNY’s College of Environmental Science and Forestry in Syracuse and joined the Coast Guard three years ago. She’s now a Seaman E3 at the Coast Guard Station in South Portland, ME. Her responsibilities at that base include search and rescue, mitigating oil spills and hazardous materials releases, harbor safety and pollution prevention as well as boarding and inspecting domestic and foreign flagged vessels for compliance with laws and treaties. Megan wants to become a Marine Science Technician. Her father says, “We’re trying to get her to go to Officers’ Candidate School and she says she’s going to give it a go.”

While their children carry on the military tradition, Jim is now a commercial heating and air conditioning technician with DayCo Mechanical Services and Kathy is a rural carrier at the Wallkill Post Office. In addition, Kathy and Jim are still serving all of us—Jim as Chief and Kathy as Assistant Chief of the Shawangunk Valley Fire Department.

Kathy summed up, “If you don’t have anybody in your family in the Army, then you don’t have a clue what it is and what happens. [Some people] have a hard time letting their kids go to college. Try letting your kid go to war. The military was a great life. I would never change anything we did. I missed my family but we made some of our best friends.” She went on to explain that when Jim was sent to Iraq for many months during the first Gulf War, her family was worried about Kathy and the kids “being alone” in Gelnhausen, Germany, where they had been living before Jim’s deployment. On the contrary, Kathy says. Gelnhausen is a major army base about 30 kilometers east of Frankfurt. There, she had a built- in support group. She was plugged into the military grapevine. She was surrounded by military families whose spouses were probably also in harm’s way. It was coming back to the States that would have made them feel isolated, even though they would have been with family. Besides, Frankfurt also housed the military’s main medical facilities, the 97th General Hospital and Frankfurt Regional Medical Center. If Jim had been seriously wounded he would first have been evacuated to Frankfurt; Kathy could have been at his side in less than an hour. Ergo, staying put was a no-brainer, no matter how odd it might appear to family back home.

The story probably doesn’t end here. Jimmy and Megan both share their father’s views on the draft, and also say that when they have children, they will encourage them towards any endeavor that includes military service.