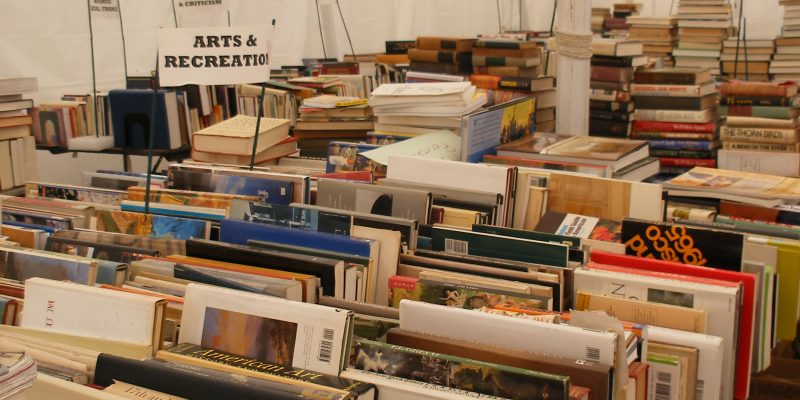 In Gardiner there was a book shed behind the old library and  Peg Lotvin used to give people interested in buying books the key to the shed so they could buy books a handful at a time.  Books were also sold from the second floor of the old library.

In an effort to revive this practice, I hosted a small book sale on Gardiner Day back in 2007, in a donated space under a tent at HiHo Home Market and Antiques Center.  I sorted, boxed and hauled out all books in the book shed and raised $800 for the Library.  It seemed I was onto something, and I decided to grow the sale into what’s become an annual fundraiser for the Gardiner Library.

In 2008, we asked for book donations and they came pouring in.  A small team of volunteers helped sort donations by categories in preparation for the book sale in September.  We rented a 20’ by 40’ tent and held our first three-day sale, establishing a pre-sale on Friday night, where we charge $10 admission at the door to those serious buyers who want first dibs.

In 2009, the Gardiner Library had moved to its new location on Farmer’s Turnpike and George Majestic was kind enough to move the book shed from the old library to the new library.  Donations arrive at the Library on a daily basis, whether we ask for them or not.  In addition to the huge annual sale, we now have two book carts located in the lobby of the library where we sell books year round.  We also have a satellite book sale bookcase, located at the Village Market and Bakery.  Donations may be dropped off at the Gardiner Library during normal business hours, and donation guidelines are available upon request.

Thank you for supporting the Gardiner Library.