Yes, the country, Greenland.  What could Gardiner possibly have in common with Greenland, other than the first letter?  No, we don’t send our recyclables from the transfer station to Greenland, but here’s the connection: Greenland is the birthplace of the kayak, or qajaq in Greenlandic, and Gardiner has many white ash trees that are dying from attack by the Emerald Ash Borer beetle.  The traditional Greenland qajaq is an Inuit hunting craft, constructed of wood and seal skins.  However, skin-on-frame construction is difficult where there are no trees.  So the Inuits build their hunting qajaq using driftwood which, as you can imagine, is catch-as-catch-can!  Do you see the connection?  Let me explain.

Over the past few years, I have been a member of Qajaq USA, a sea-kayaking club associated with Greenland’s national club (www. qajaqusa.com).  We host kayak events across the United States, offering instruction in traditional Greenland skills, including paddling, rolling and qajaq-building. (My own skin-on-frame qajaq is a hand-made replica, by Fred Randall in Maine, of one commissioned by Commander Robert Edwin Peary as a scouting qajaq on his 1896 expedition to the Disko Bay region.  It is called the “Goodnow,” for the library in Sudbury, Massachusetts, which houses the original qajaq donated by Peary.) 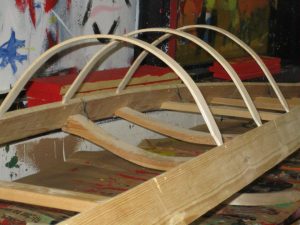 Gardiner White Ash being made into a kyack in Greenland.

One annual kayak event, in June, is on the Hudson River at Croton Point Park and it was there that I met Adam Hansen, a 20-something Inuit from Aasiaat, a small fishing village on Disko Bay.  He told us how difficult it was to acquire enough wood these days to make traditional qajaq.  So, with the help of some friends, I cut one of the dying white ash trees on my property into three-foot lengths.  Then, with friend Ed Lamon of Rosendale (an avid Greenland-style paddler and carpenter by profession), chopped, sawed, ripped and planed them into hundreds of pieces of rib stock, 32” long by 1 ¼” wide by 3/16” thick.  It all packed up into a 25-pound package about 3’ x 1’ x 1’ which I shipped to the Greenland club. (I considered the $200 shipping cost to be a donation to the club.)

According to Adam Hansen, the wood we sent is great.  He says, “we have to keep [the rib stock] in a cold place to keep them moist…then we soak them in the bathtub or boil them for about 30 minutes to bend them into ribs. I have [also] played with the wood, making small Greenlandic drums which are great amusement for my nieces, nephew and son.”  Woodstock Percussion has nothing on Adam!  Other builders have told Adam he should try to get a new stock of Gardiner ribs so I guess we will be recycling more of our white ash into ribs to send to Greenland, but my real pipe dream? The 2012 Greenland National Championships take place in Paamiut from July 5th to 11th, 2012; how great  would it be to round up lots of Gardiner residents who want to send kayak-building materials for distribution to the clubs at the competition!

Greenland is a Danish colony of 56,615 people, 822,706 square miles in area, the largest island and least densely populated country in the world.  However, they are actually just “across the pond,” 2000 miles to the Northeast, only two time zones away (about the same as a trip to Salt Lake City, Utah).

If you decide to visit, bring some Gardiner white ash in your suitcase to recycle in Greenland, and if you’d like to join us in shipping some white ash ribs up there, please get in touch (dsides@hvc.rr.com or (845) 256-9395).