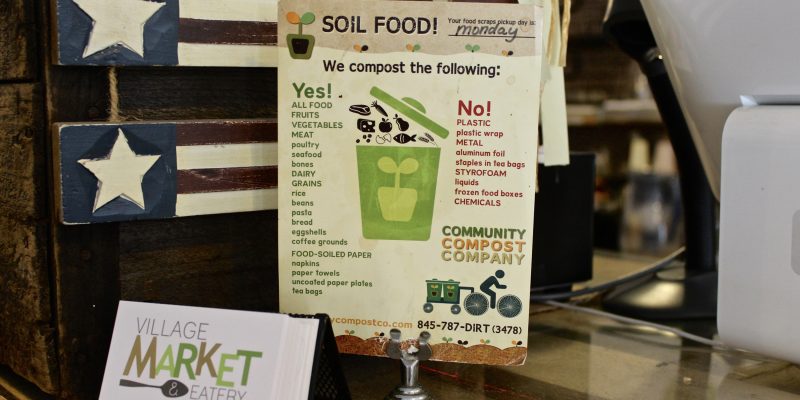 In today’s world, there is an ever-growing demand to increase awareness about our carbon footprint on the planet. Going “green” has affected almost every industry: architecture, transportation, retail, and beyond. In most recent years, the restaurant industry has taken big strides, and I was able to take a closer look at what restaurants are doing, right here in Gardiner to keep the environment clean and safe for generations to come.

Carl Zatz, owner of the ‘Village Market and Eatery,’ began implementing green practices when the eatery opened nearly six years ago. Carl explains that, “We were one of the first in Gardiner to eliminate plastic bags, and on the heels of doing that, we eliminated styrofoam and styrofoam containers. The county shortly followed suit.”

They’ve also proudly implemented Community Composting, much like other restaurants in Gardiner, and have composted over 10,000 pounds of waste since they opened. Carl further explained that the staff sorts through the recycling and compost by hand to be sure that no unusable items make it into the pot.  In addition to having a single-stream recycling system, the restaurant also recycles their frying oil every month with a local, New York company.  As an involved member in the community, Carl confirms that he is passionate about doing his part to better the environment and is looking to further the restaurant’s green practices in the future.

Another new and eco-friendly trend is choosing organic and local. All of Gardiner’s restaurants feature locally sourced farm products and some even grow their own, as does Gardiner Liquid Mercantile, in a backyard garden maintained by executive chef, Patricia Lowden.  Featuring crisp herbs, lettuce, tomatoes and more, the garden fuels inventive and fresh homemade drinks and nosh.  The plot is even protected from grazing animals by a handmade, recycled wood fence created by owner, Gable Erenzo.  Gable has also made the restaurant a part of Taliaferro Farm’s CSA, which provides  the restaurant with organic produce throughout the year. Gable explains, “It’s a matter of supporting our local business partners and being sustainable for the environment. The quality is worth the price.”  Additionally, the restaurant gives new life to spirit and wine bottles, repurposing them for the bar’s syrups and shrubs, and using them as vases and water bottles; a trend that can also be seen at  Tuthill House at the Mill.

“Going green” is more than simply a trend; it’s become a way of life, a daily practice, for both people and businesses.  It’s these seemingly small shifts that add up and lead to big change.