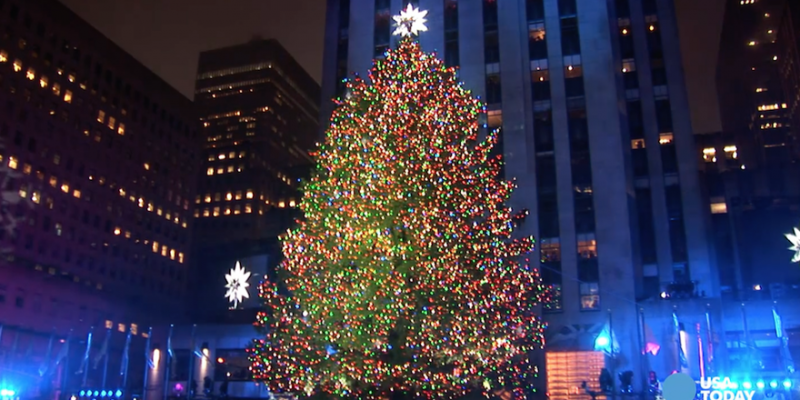 “I remember jumping over that tree!” exclaims Al Becker, who built the bungalow next door to the house with the tree in 1952. At that time the now 80 year old Norway Spruce on route 44/55 just west of Lombardi’s was the tree in which the neighborhood children played. “It was well taken care of and it just grew and grew.”

Al’s Asendorf’s parents, Gertrude and Albert, moved into the home with the tree in 1957, when the tree was about 10 feet high and Albert was four years old. Al grew up, married Nancy Puchalski, and Al and Nancy’s children and grand children grew up with the tree also.

But then the tree became too big—79 feet high, 47 feet in diameter. Al became concerned that in wind the tree might fall on the house or wires, so concluded that it needed to be removed.  He accessed the Rockefeller Center website and donated his tree for their annual event. He was surprised when their gardener came out to inspect the tree and, later, when he received word that his tree had been chosen to be adorned with five miles of lights as the most famous Christmas tree in the world. 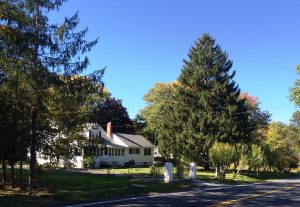 The tree in Gardiner in October 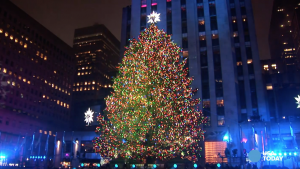 The tree in all its glory at Rockerferller Center

Watching the tree come down was an event viewed by several hundred people.  The tree had been prepared ahead of time, its limbs bound and lower limbs individually wrapped in burlap. It was wrenching for some of the observers to see this once magnificent tree now trussed and attached to a crane hovering many feet above. It was cut with a chainsaw in minutes, but settling it on the flatbed trailer took about an hour as arborists used wedges and ropes to very carefully prepare their fragile treasure for its trip to Manhattan.

The spectacle in Manhattan  today is a far cry from 1931, when Italian construction workers excavating the site for Rockefeller Center mounted the first tree, decorated with cranberry strings and foil wrappers from blasting caps!

How does Al feel?  “Happy and honored.”  Seeing the tree at Rockefeller Center “was very exciting.  The tree looked much bigger than in the front yard!” The wood will eventually be donated to Habitat for Humanity.  What will he do now?  “Do the whole thing over again-“ plant another tree in its place for future generations of children to enjoy.