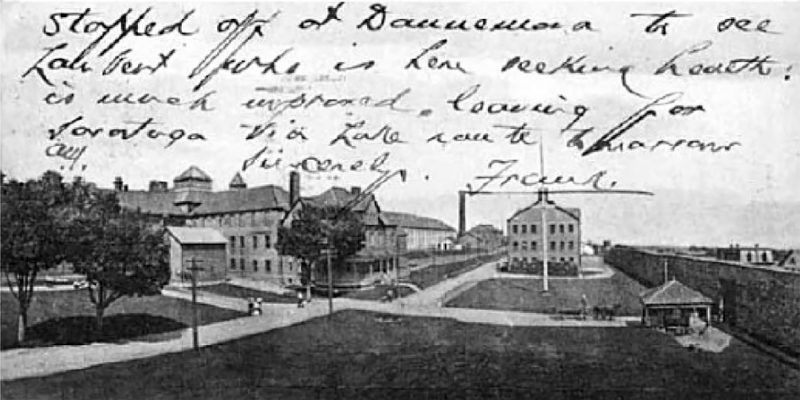 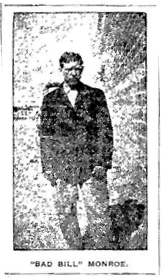 Newspapers during the early 20th century fed their readers’ fascination with notorious characters, following every move of individuals with curious names like, “The Kid,” “Gyp the Blood,” and “Scarface” Al Capone. Many Gardinerites do not realize that we had our own local bad man, “Big Bad” Bill Monroe, sometimes known in the newspapers as The Gardiner Desperado.

Before the summer of 1908, William (Bill) Monroe was well known locally for his explosive temper, especially when he consumed alcohol. Monroe stood 5’6” and weighed 155 pounds. In his mid-twenties, newspapers described him as having light hair, a stout build, a fair complexion, a tattoo of a star on his wrist, and a small mole on his left cheek. He lived in the small settlement of Jenkinstown, with his wife, Katie Davis.

Always on the lookout for work, on August 21, 1908, he walked to the Abram Deyo farm at Ireland Corners. He had worked for Abram Deyo before and even recognized his brother Jonathan (a prominent lawyer) visiting at the time with his family. The Deyo brothers turned Monroe down, for which Monroe promised vengeance. Later that day, he returned, inebriated, to the Deyo home (today, Ulster Savings Bank) and assaulted both Deyo families, including children, wives, and farm hands. After cutting the phone lines, he burned the Deyo barn to the ground and fled; the legend of Big Bad Bill was born.

Four days later, Sheriff Decker of Orange County arrested the fugitve in NJ. Monroe escaped, even though shot twice by Decker, and made his way back to Orange County, where he published a letter in a local paper faking his death. Authorities saw through the ruse.

Shortly after, Monroe let Decker and Ulster County Sheriff Boice know that he planned to go to the  Orange County Fair, and that if they found him, he would go quietly to jail. Big Bad Bill showed up dressed as an old lady, mocking law enforcement by asking the officers for directions. The public laughed along with Monroe as newspapers reported sightings all over the country, and a frustrated Gardiner Town Board offered a $100 reward for his arrest.

In 1908 officers finally cornered Monroe in a home in NJ, but the Gardiner Desperado smashed through a back door. Deputy Sheriff William Leonard caught up with him in a corn field and alerted others that he was emerging with Big Bad Bill, only to have Monroe escape again in a hail of gunfire.

Then, in June 1909, word came that an officer in California had shot Monroe, but he escaped by swimming across a river. Finally, he was captured on November 22, 1909, and jailed in El Centro, California for a crime he committed there. Decker and Boice headed out west to take custody in early December. Monroe was elated to see them, upset that he was being housed with hardened criminals when he did not consider himself as such. He also commented that Boice’s jail in Kingston was kept nicer.

The three men boarded a train and, once they were close to Kingston, Monroe said he wished to clean himself up for the reporters and gawkers who would inevitably come to see him. He arrived at the Ulster County Jail on December 16, 1909.

Just about everything he did was fodder for the news: when he was allowed to go to the dentist for a toothache, it was reported in the papers, including that he cried about going there. Eventually, though, Big Bad Bill went on trial and subsequently was sent to Dannemora prison on March 29, 1910, after his highly publicized trial. He was sentenced to four years and eight months for assault.