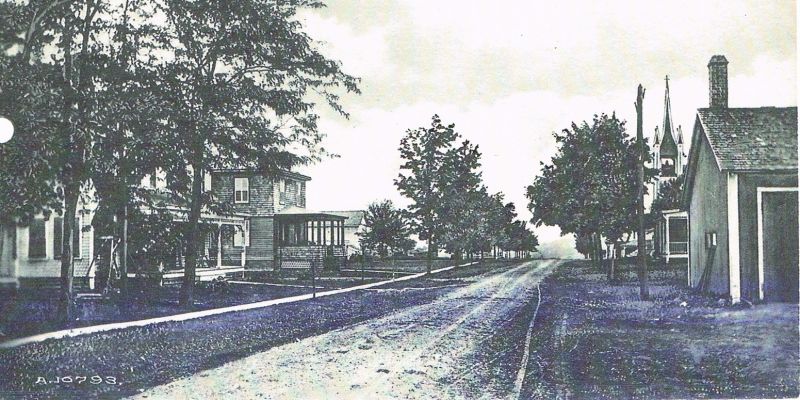 As Gardiner plans to build new sidewalks in its hamlet, few Gardinerites seem to know that the hamlet at one time already had a substantial sidewalk system. In the early 1900s, in the central hamlet, services were available which are not now available, such as a garage, drug store, a newspaper office, lawyer’s office, doctor’s office, hotel and railroad station. At that time, when Main Street was surfaced only with gravel, and its traffic was a mix of automobiles, carriages and wagons, old photographs show sidewalks.

In the center of the hamlet, photos show sidewalks on both sides of Main Street. Farther west, opposite the Reformed Church, sidewalks show only on the south side of the street. Old postcards seem to show the sidewalks as made of varied materials, including concrete and gravel. In at least one low, wet place, where Main Street intersects with Arch Street, more than one postcard―one of them postmarked 1907―shows a section of sidewalk made of planks. In the 1940s, Kathleen Conner, who grew up in the Gardiner hamlet, particularly recalls riding her bicycle on the south side of Main Street where it curves toward Sand Hill Road (a wine shop is on that corner now). She recalls the sidewalk there as consisting of ashes.

The current plan to rebuild the hamlet’s sidewalks has been before the town since at least 2004. According to that plan, Main Street sidewalks would extend farther than they once did, reaching from the Reformed Church east through the central hamlet to the new Town Hall. Besides this there would be a branch reaching down the rail trail to cross Farmer’s Turnpike and then connecting to the new Gardiner Library’s existing sidewalk.

For years the plan has faced questions. Some people advocated sidewalks for the safety they provide, others tended to doubt the need for them.  By 2006 a grant had been secured from federal sources and by 2009 grants from state sources had also been secured.  Uncertainty remains, however, about what share of costs will fall to the town to pay.  Some advocated that if the town were to pay any share of the cost, the town should create a special sidewalk district for the area where the sidewalks are to be, and require that the property owners there, rather than the taxpayers of the whole town, pay the cost. Former Town Board member Paul Colucci concurred, saying that the hamlet should pay for its new sidewalks because sidewalks would raise the value of hamlet real estate. Town Supervisor Joe Katz and Town Board member Nadine Lemmon, however, worried that this could stress hamlet businesses and retired residents on fixed incomes, and also argued that the whole town benefits from sidewalks.  By early 2009, however, the Town Board had rejected the idea of forming a sidewalk district and though there is some possibility this decision could be overturned, Supervisor Katz now sees the town as paying very little for the sidewalks, making the question of a sidewalk district seem less relevant.

The sidewalks can be built whenever grant funds are made available.  This could still take some time since the DOT, having approved the grant, must now approve the plans, and at present is overwhelmed with work.

According to Katz and Lemmon, phase one is to reach from the Town Hall on Main Street to the Rail Trail crossing. This phase is to be paid for mostly by federal grants and partly by state grants, with only 5% coming from the town.  The town has a reserve fund available for this amount. Phase two, which will be paid for entirely by Federal Stimulus funds, will reach from the Reformed Church to the Rail Trail crossing, with a branch to pass south on the rail trail.

While it remains possible that building sidewalks will squeeze out some parking opportunities in the central hamlet, the project is not expected to prevent continued parking on both sides of the street. Nevertheless, the town hopes to improve parking by paving the town parking site on Farmer’s Turnpike in front of the library entrance pillars. There is also a proposal to add parallel parking on the east side of Second Street, a side road adjacent to HiHo Home Market.