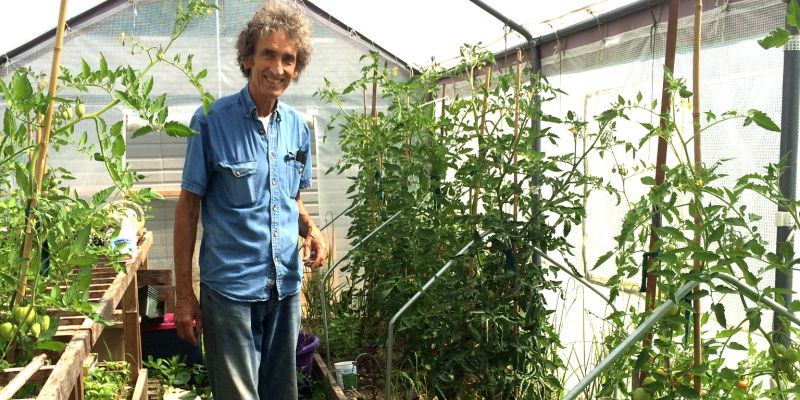 Editor’s Note:  At the time of this writing the Gardiner Farmer’s Market was temporarily on hold.

“All of life is connected.  We could not exist without trees for oxygen, the sky for rain, the sun for energy.” George describes his holistic approach to gardening and farming, explaining that there is no separation of soil and plant.  Soil biology is just as important as the plants that he grows.  His organic and “nutrient dense system” is  exceptionally clean and of highest possible nutrient value, with plants so healthy that they ward off disease and insects.  “Healthy soil, healthy plants, healthy people.”

His soil is tested annually by Logan Labs in Ohio in order for him to balance the minerals, and he inoculates all plant seed with symbiotic bacteria/fungus to promote healthy soil life. He farms on raised beds because the clay soil which, although a good soil, is somewhat poorly drained and difficult to work in Spring.

For those of us who grow vegetables in rows—carrots here, lettuce there—George’s garden is a surprising, lush mixture.  Interplanting “smelly” plants like onions, garlic, mint, dill, and cilantro among the standard vegetables tends to “confuse the insects” and deter them, though not all of them. While I was there the cabbage white butterflies were flitting around the kale and broccoli. Their eggs are laid on the plants and hatch into green worms that voraciously consume the host plant. Dill was planted with eggplant and onions; kale with onions, leeks and cilantro; tomatoes with basil and parsley.  Vegetables that last the whole season are interplanted with short season crops like  lettuce, arugula, and radishes.

Of special note are the Indigo Rose Tomatoes, bred to be high in antioxidants. They are small, purple on top and ripen to a rose color underneath. Besides looking beautiful in a bowl with other tomatoes, they have a lovely subtle flavor, and I always headed for them at the farmer’s market.

Obviously these gardens are labor intensive, especially on a hot summer day. The big tub in the rear is not for irrigation, but for George, who periodically jumps into it for relief from the heat! George first became interested in farming as a young boy who planted a watermelon seed and was “blown away” when it sprouted and grew a huge fruit. Growing up in rural Pennsylvania, where the adults seemed “to know the right way to do everything,” the young boy gravitated towards the farmers, who “seemed real,” and he adopted them as role models.  At age 14 he and a couple of friends began growing vegetables on the half acre of open land next to George’s home, growing just about every seed in the catalog and selling their produce at a stand.  Soon after, he rented land which became a large corn and tomato farm, and hired 10 kids to help him maintain two truck stands and a wholesale route as well as his own stand.

But renting was not the answer.  George needed to buy a farm.  So how did he make money?  He taught English to army kids in Jedda, Saudi Arabia!  He says with a smile that he also taught them peace songs.  After a year and a half he had made $12,000 which was a lot of money in 1970!  On the side, he went into the mountains to acquire Bedouin robes, which he sold on Carnaby Street in London and in Amsterdam. He was able to put a down payment on 350 acres in Cortland County, New York and launched one of the first organic farms on the east coast.

The farm lost it all in the floods of ’72, and George was back teaching English in Iran. Alexa, a young artist from New York City, took the Orient Express and “joined me—very brave of her.” Soon the enterprising couple was establishing an importing business, designing and producing handloom cotton wrap-around multicolored garments and selling them to companies such as Sears and Lord & Taylor.  Returning to the U.S. they conducted their business from Alexa’s parents’ basement in New Jersey.

Somehow, George and Alexa found time to get married and raise two children—Nikolai, who is now a sculptor creating displays for the Bronx Zoo and making furniture, and Annie, an artist, writer and farm worker. Having a family necessitated “real” money so they became an authorized Value Added Reseller for Apple Computer. “Fortunately we found some people who really knew computers, and we hired them!”

George also worked as an interfaith minister and spiritual counselor for KidsPeace, dealing with youth in crisis.  He remembers wanting “enlightenment” from a very young age, and has always pursued psycho-spiritual pathways. One day he may teach “liberation meditation, to help create the mental, emotional, and spiritual well being that we all desire.”

In the meantime as out-manager of the Gardiner Farmers Market, he cautions that we need young people who will step up as farmers. “The Market needs to be revitalized with youthful energy.” George would be willing to take on an apprentice at his own place and teach him or her all he knows. Pass it on!