Children’s Librarian and programmer Nicole Lane tells us about a wonderful, active summer at the Gardiner Library: 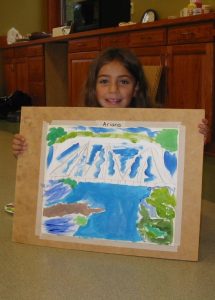 The Summer Reading Program was a huge success. Over 200 children participated in picture book illustration workshops, drumming classes, nature crafts programs, origami and storytelling classes and  family music programs. In addition, over 180 children from the Recreation Program participated in programming at the library once a week, culminating in a fantastic art show at Majestic Park.  Be on the lookout for next year’s summer programs. I’m  already bubbling with new ideas.

On a Saturday morning local art teachers Heidi Meier DiPonio and Cythia O’Herron taught enthusiastic kindergartners through second graders about “plein air” painting (painting outdoors, weather permitting!).  After a discussion about how to mix primary colors to get new colors, the children made personal color wheels to take home.  They then decided what they wanted to paint using pictures of the local landscape which Cynthia had brought as inspiration.  Other grade groups are meeting at the Gardiner Library to take part in “plein air” painting classes as well. 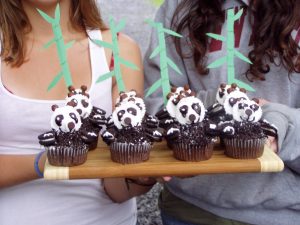 You could smell the barbeque from the parking lot so we followed our noses to where, once again, the Sycoff Family and other volunteers had produced a delicious southern barbeque: pulled pork, BBQ chicken, baked beans and cole slaw. We indulged heavily while listening to live folk music by the Shoe String Band.  This feast was followed by a lively cake and pie auction with fabulous auctioneer Fred Mayo—and when I say lively, I do mean lively!  The cakes and pies, all generously baked and donated by locals, inspired bidding wars, including one bidding battle between a five year-old boy and his mom.  Who could blame them? There was a chocolate rum cake, a peach pie, a beautiful box of cupcakes decorated to look like sunflowers and so much more.  The highest bid was for an incredible looking coconut layer cake that went for $456!  A dozen cupcakes decorated to look like panda bears fetched $375 and, by the end, the library had raised over $6,000.

Linda Majetic-Hansen fills us in on Gardiner Day:

In the great tradition of Gardiner Day the day began gray and drizzling as vendors, businesses and crafters alike braved the chilly morning to set up for the day’s events.  As always though, the sun began to peek through the grayness, and sunshine and blue skies graced the 20th Celebration of “Family, Fun and Friends” at Gardiner Day.

The aroma of sausage and peppers quickly moved through Majestic Park.  Committee members and volunteers scurried around preparing for the day’s beginning with the singing of The National Anthem.  Something was happening in every corner of the park throughout the day. Pie-eating contest winners Madeline, Josh, Kayla, Jamie and Ashley continue the old fashioned tradition. Bands, magicians and amazing wildlife were found in the Entertainment tent.  Demonstrations by local karate, gymnastic and dance studios were also a favorite as we watched the youth of our community shine. It is always so gratifying to watch the generations interact and enjoy being part of our community, the inspiration and spirit of Gardiner Day!

As always the Gardiner Day Committee would like to thank everyone—participants, volunteers and vendors—your efforts made Gardiner Day 2009 another huge success!  Your continued support throughout the year are vital to the events we sponsor: Holiday Tree Lighting December 4th, the American Red Cross Blood Drive in January 2010 and the Spaghetti Dinner February 2010. See you there!