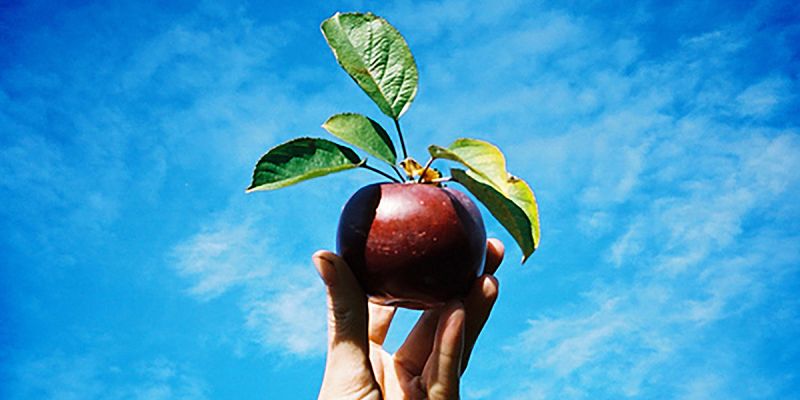 What grows in Gardiner? Well, at Dressel Farms, history does: apples with exotic names such as Bedan, Frequin Rouge, Madaille d’Or and Dabinette; and others, with interesting names such as Somerset Red Streak, Porter’s Perfection, Chisel Jersey, and Brown Snout.

What these apples have in common is that they are cider apples that originated in France and England. Tim Dressel reports that Dressel Farms also cultivates another 15 varieties of cider apples and 45 to 50 varieties of “culinary” (eating) apples. The Esopus Spitzenburg is his favorite American variety, first discovered in… Esopus, of course. It is a rare apple that is useful for both eating and cider making.

Cider apples differ from eating varieties in various ways. Mr. Dressel explains, “Cider-specific varieties have some quality that makes them undesirable for culinary use. Examples would be size—many are very small; texture—mealy, tough, etc.; and appearance.”

Probably the biggest deterrent is that many cider apples are either tart, bitter, or astringent, since they contain higher levels of tannins, which taste bitter when eaten. But when the juices of these cider varieties are combined and fermented, they create complex flavors, a pleasant “mouth feel,” and much more dynamic, interesting, and complex flavors that can be evaluated on taste continuums, as wines are. In contrast, eating apples, when fermented, simply taste like apples.

The history of apple propagation is the stuff of legend. Think Johnny Appleseed, a story based in historical reality. All apples originated in what is now Tajikistan, and were transported throughout Europe.

An article from the Brooklyn Botanical Garden, on declining Apple variety diversity, explains that apples are known for their heterozygosity, which means that a seed taken from, say, a Gala apple, may develop into an apple tree with very different characteristics from its parent, and the fruit can be different as well. This allowed many different varieties of apples to develop, both in Europe and in the U.S. (In the 19th century it was estimated that there were around 14,000 varieties.)

Due to the needs of commercial production and the lack of consistency of apples grown from seed, modern cultivation methods focus on grafting or budding. The European varieties grown at Dressel Farms were cultivated in the U.S. by American growers, and the growth of apples for cider, and hard cider in particular, has helped to preserve apple varieties that were once rare in this country.

In Europe and Colonial America, most apples were grown primarily for cider making. Cider was a valuable commodity and is becoming so again today. According to Cornell University, the hard cider business in the U.S. has increased tenfold  over the past decade, to 1.5 billion dollars. New York, as Gardinerites well know, has the right climate and soils for growing apples, and thus Gardiner has benefitted economically from this as well.

The next time you visit Dressel Farms, try their Kettleborough Cider House “Huguenot Cider.” It is blended exclusively from heirloom varieties from Europe, England and the US. A sip of this cider is a sip of history.