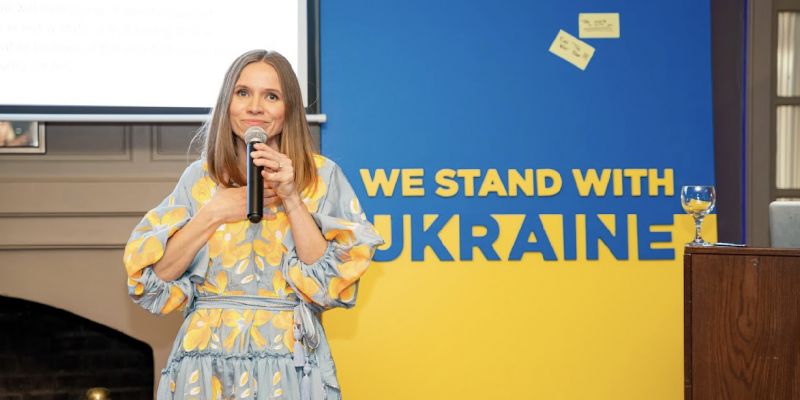 A Community United Through War

As you drive through the back roads of Gardiner, you may notice Ukrainian flags hanging from mailboxes and local businesses, a gesture very much appreciated by Gardiner’s Ukrainian community members.

Halyna Shepko, a Gardiner resident born in New York, grew up speaking Ukrainian as her first language. While in school she would tell her classmates about her heritage as a Ukrainian-American and remembers that many couldn’t point out Ukraine on a map. Shepko continues to study Ukrainian weaving, folk healing, and other traditional customs, while also caring for her vast gardens and various farm animals. “Ukrainian culture is deep within us,” she said proudly. Shepko has family and friends who are still residing in Western Ukraine, helping refugees streaming into their area from the East; they make tourniquets and do whatever they can to aid others who are struggling during this time.

Social media has allowed Shepko to communicate with loved ones and witness what is happening within Ukraine. “One young cousin Facetimes us from a bomb shelter in Lviv and shows us the bombing. Sometimes she cries and is very afraid. I keep seeing posts about the Ukrainian soldiers being killed, some are very young, and I know their parents. This is unfathomable. Shepko’s 85-year-old mother was a refugee in Ukraine as a child. “ The images of mothers carrying their babies out of the danger of war remind her of her own childhood.” Shepko shares that she is especially heartbroken for the family members who are forced to leave their homes and flee to safety. “It horrifies me to say that in the last 120 days of war more than 300 Ukrainian children have been killed. Innocent children.”

Gratefully, there has been truly heartening community support for Ukraine, which is evident locally in the display of Ukrainian flags, demonstrations in front of the Elting Library, and donations for Ukrainian American Youth Association of the Hudson Valley, which have been incredible. Shepko’s 17-year-old son, Zorian, is part of the New Paltz HS youth group whose members, friends, and families donate and pack supplies to ship to Ukraine.

Olana O’Connor is another local resident from Ukraine. O’Connor grew up in the city of Ternopil, Ukraine, and moved to the Hudson Valley in 1999. She is currently an educator at SUNY New Paltz and has recently been invited to schools in the area to talk about the war and her family’s story. O’Connor’s life is steeped in Ukrainian culture which among other things includes both food and education. “Food has this special transcending unifying element…it creates togetherness and reminds me of growing up in Ukraine,” she said. O’Connor shares that Ukraine has one of the highest literacy rates in the world. This tradition of education is deeply ingrained in O’Connor and she volunteers her time to help support ongoing education locally as a board member of Ulster County Community College and as chair of the Presidential Challenge Scholarship Committee, which finds local sponsors for students to attend two years of Ulster Community College. She has also been interviewed by local publications, invited to speak at New Paltz High School, and has also hosted a fundraiser for supplies, coordinating with local sheriff Juan Figueroa and local police departments who have been collecting bulletproof vests and sending them over to Ukraine. If you are interested in supporting or donating medical supplies, contact: The Ukrainian American Youth Association of the Hudson Valley, Elting Memorial Library in New Paltz, Gardiner Library, the Holy Trinity Ukrainian Catholic Church in Kerhonkson, or visit razomforukraine.org to donate. There is also a need for teachers who are willing to help and support refugees. If you are interested in learning more, please contact Olana O’Connor at olanaoconnor@gmail.com.