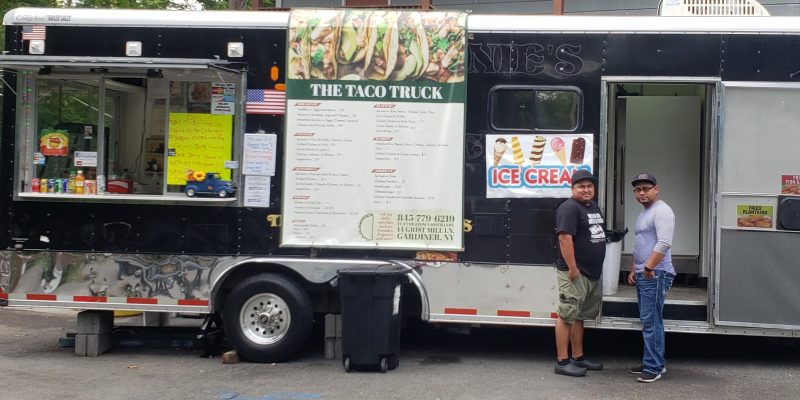 By now, anyone who “likes” the Gardiner NY Facebook page has heard about the Taco Truck phenomena that exploded on the Gardiner scene about four months ago. Wildly popular, the Taco Truck’s tasty, fresh, and economically priced food has been well-received by Gardiner’s residents and visitors alike. This past Spring, Jose Villanueva and his brother Elmer brought their small taco truck and parked it in the parking lot of Lightning Express on Main St., Gardiner, and started doing business there with the owner’s permission. Of course, not everyone was happy about this or any other food truck coming to town. Across the USA, more traditional brick-and-mortar restaurants and some community groups still oppose food truck businesses. Numerous laws and regulations have been put in place across the country to curb mobile food vendors’ numbers and locations. And so it was in Gardiner, and in no time, the Taco Truck needed to find a new location or go away. Then, Jose’s stepdaughter, Francheska Pereyra, became outraged that her hardworking stepdad was losing his livelihood after all his hard work. She took to the Gardiner NY Facebook page to say so. Literally, hundreds of residents liked, followed, and commented with their support. The Villanueva’s started receiving invitations to park their truck in a number of places throughout town. All the while, Francheska kept their Facebook followers up to date on their progress, and with help from a friend, she created the Taco Truck’s Facebook page. Seemingly in no time, The Taco Truck found a new home in Gardiner at the Tuthilltown Distillery’s parking lot at 14 Grist Mill Lane. You’d think that this somewhat off-the-beaten-path location would ruin their foot traffic and they’d only have distillery visitors buying their food, but again social media posts alerted residents about the move, and on opening day, there were so many cars there for the opening that parking became an issue. Word of mouth, signage on the main road, and consistent social media continue to drive a steady stream of new customers there, and once they taste the food, they return again and again. Within four months, the Villanueva’s needed to buy a larger food truck to accommodate their ever-growing pool of loyal customers. Touring the new truck, its clean, streamlined design and copious freezers, fryers, etc., gives one confidence that they can handle the growing crowds flocking to this new taco hotspot with food for carnivores and vegetarians alike.

I visited Jose Villanueva at the Taco Truck in the early morning to catch him before the breakfast rush for an interview—yes, they do breakfast too. We sat outside at one of the nice, umbrellaed, picnic tables to talk, and I asked him, “Why Gardiner?” Jose replied, “I live in New Paltz, and my brother and I wanted to try Gardiner because so many people go there for the outdoors. It’s also a small town that might like to have another food option.” “Were you right?” I asked. “Oh yes! People in Gardiner have accepted and supported us 100%! Do you know that people contacted us saying we could park on their land for free? We love it here and want to give back to the community, so we always recommend people to other businesses in town, like the wine store, the Ranch, and to BaseCamp.” When asked about their future plans, dreams, and the upcoming Winter, Jose replied, “We have a big indoor dining room space here now and so have started catering indoor parties, and we intend to stay open all winter, except when the snow is so deep, we can’t get here. Maybe in a few years, we can open our own restaurant–that’s the dream.” Yes, that’s their dream and a wonderful example of the “American Dream” that some still strive for. For more info: www.facebook.com/groups/3049563315357569, or to order ahead: (845) 779-6219.