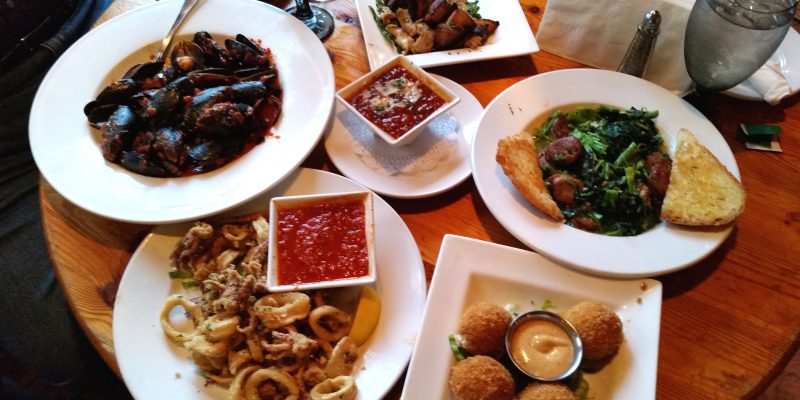 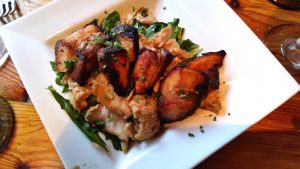 A few Fridays ago, three of us went to Nu-Cavu intending to have dinner and got waylaid by the appetizers. They all sounded so good we couldn’t make a decision, so we decided not to make a decision and ordered everything (OK, not quite everything, but five things, which was enough to make main courses both unnecessary and unwise).

The range of dishes we had that night was exceptional. The Fried Calamari, with marinara and Fra Diavlo sauce ($14), was very crisp, but still very tender. Sausage and Broccoli Rabe with garlic and olive oil with Garlic Bruschetta ($10) was great, with the bruschetta almost upstaging the rest of  the dish; the bread had been brushed with olive oil and fried until crisp around the edges and chewy in the center. When drenched in the surrounding juices, it was wonderful. Sautéed Prince Edward Island Mussels with Marinara sauce were big and meaty, with great “scoopable” sauce, and the mussels also come with Fra Diavlo or white wine garlic sauce (All $14).

From the specials that night, we selected Crabby Balls, panko encrusted Crab Rangoon balls ($12) and the intriguing “Bacon Steak,” pan seared pork belly served over fresh spinach with grilled mushrooms ($11). It was the star of the show. The pork belly had been braised until incredibly tender and seared until it was crisp and the flavors were perfect. The Crabby Balls were a close second—like mini crab cakes with a crunchy crust.

Owner and Chef Mike Gelsomine says specials stay on the menu from Thursday through Sunday, and, if they’re popular, reappear from time to time. (Let’s start a write-in vote for that Bacon Steak …)

Nu-Cavu has been located at the Kobelt Airport at 857 Plains Road in Wallkill since 2009. The inside space is wonderful and it also has an expansive outdoor patio for alfresco dinning in the summer.  They open at 11:30 am Wednesday through Sunday for lunch and dinner. Head on over. It was fun, lively and delicious. 845-895-9000.  Closed Mon. & Tues.