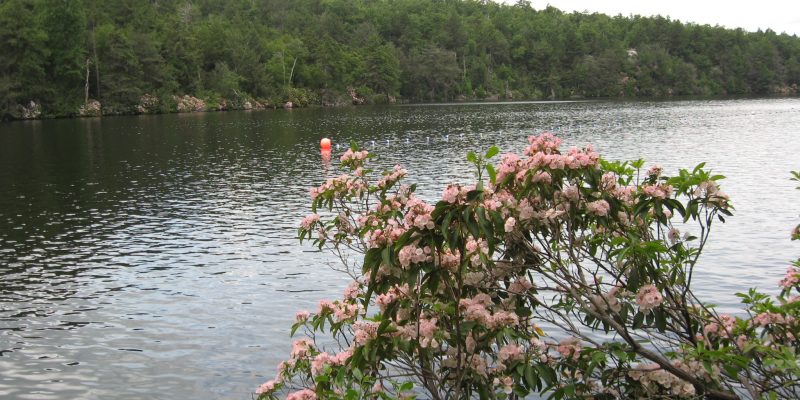 Lake Minnewaska, Its Water, Fish and other Swimmers

Many of us who swim in Lake Minnewaska have noticed changes in the water.  Sometimes it’s clear, sometimes not so. Sometimes there are fish; once there were none and it was considered a dead lake.  What’s the story here?

Minnewaska is one of the five glacial sky lakes on the Shawangunk Ridge.  From 1922 to 2008 the lake was indeed fishless.  The initial cause was the drowning of a hotel guest and the use of dynamite to recover his body.  Three hundred perch died as a result and the Smiley Brothers, who owned the lake at the time, began to stock it.

Two problems ensued:  it was difficult transporting fish in wagons over bumpy dirt carriage roads and 50% died on the way. In addition, the fish didn’t reproduce in such acidic water, so restocking would always be necessary and was discontinued.

Years after the Smileys abandoned their restocking efforts, in 2008, a Golden Shiner, which is a small plantivorous minnow, was introduced, possibly by a fisherman’s discarded bait or possibly by a bird touching eggs in one location and dropping them in Lake Minnewaska.

The Shiners caused an increase in algae and phosphorous as well as a decrease in water clarity and zooplankton density. The Golden Shiner population peaked at about 15,000 in 2013, but was wiped out by 2015 following the appearance, in 2012, of Largemouth Bass.

One result of the minnow’s absence is greater water clarity. Currently, what appear to be minnows are baby Largemouth Bass. Unfortunately big Bass have a tendency to eat little Bass.  On another down note, the introduction of fish seems to have eradicated the amphibians; the Green Salamander no longer took care of its eggs.

The lake receives very little inflow of water; it is fed mainly by rain.  Rain is currently more neutral thanks to the 1990 Clean Water Act amendment curbing air pollution. In the 1970s the lake’s pH was 4.0; in 2014 it was 6.5.  Since the trails around the lake are now repaired with shale; this, too, might have lowered acidity. No one knows for sure, and studies are ongoing at SUNY New Paltz, Mohonk Preserve and Minnewaska State Park.

Fish do well in Mohonk Lake because it is lined with Martinsburg shale; all shale neutralizes the effects of acid rain.  Lake Awosting, on the other hand, has been fishless for 100 years.  In 1957, 1,500 trout were stocked in that lake and in four to five days most were dead.

The other swimmers in the lake, humans, have also had an on again off again history.  Up to the 1980s people swam freely. When Minnewaska was purchased by the state in 1983, the master plan had nothing in it about swimming.  Public pressure led to the creation of a small,  cribbed in area in 1988.

It was enlarged somewhat in 2000.  A more concerted effort between 2000 and 2002 led to relatively free deep water swimming and an organization called the Minnewaska Distance Swimmers Association. More details on this history can be found at minnewaskaswimmers.org.

Lake Minnewaska was carved out during the last glacial retreat. Most of its past is unknown to us, but as a living, evolving body the lake creates its own ongoing story.