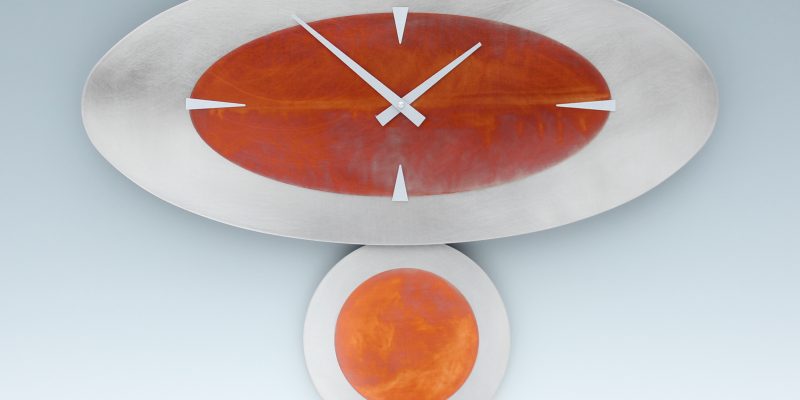 Leonie Lacouette: Time Is In Her Hands

Esteemed clockmaker Leonie Lacouette’s grandfather, a Frenchman who fought in World War I as cook on the front lines, came to America in the 1930s. By 1937 the family had discovered Tillson Lake in Gardiner and, shortly after, bought the perfect property on what is today Lacouette Lane-a location close enough to walk through the woods to the lake from. Imagine that?

Leonie’s father was an artist and set designer; his wife, an actress. They came weekends to the property from Hell’s Kitchen in Manhattan, where Leonie spent her teenage years attending the High School of Art and Design. The weekend home became permanent, and Leonie eventually attended SUNY New Paltz where she studied ceramics.

It was a time of artistic discovery and exploration and in 1981 she met her husband Bruce Pileggi, a builder, local actor and artist. He helped her set up her first studio. Her “ah-ha” moment came when she saw an ad for clock movements. She was hooked; her first clocks were ceramic, but at SUNY she had also pursued metalsmithing,  painting and sculpture, all of which she now incorporates in her contemporary, innovative clocks.

She is a master of invention. Her work has evolved from “kitschy” playful pieces to sleek, sophisticated design-oriented and timely wall sculptures. Patintated copper is her signature look, while employing highly stylized geometric shapes. Her current studio, meticulously designed by Pileggi, intrigues artists, machinists and technicians alike. Her clocks are all hand assembled of components such as metal, clockworks, pendulums and a wide variety of altered surface materials. Each clock requires cutting, drilling, polishing and patinated metal surfaces combined with faux-finshed wood, stainless, and copper, cherry veneer and barnwood. She has become a master of surface decoration.

Leonie works with her longtime assistant, Gardinerite Lesley Rokjer.  The creativity involved in any clock by Leonie is astonishing. She has tackled the age-old dilemma of time in a totally unique way. Locally, her work is at the Mark Gruber Gallery in New Paltz and Sweetheart Gallery in Woodstock. In the wider world she is represented at over 150 galleries and shops across the United States, Canada and the Virgin Islands.

Don’t you think it is high time to visit her website, LeonieTime.com? You will clock up a most unique experience.