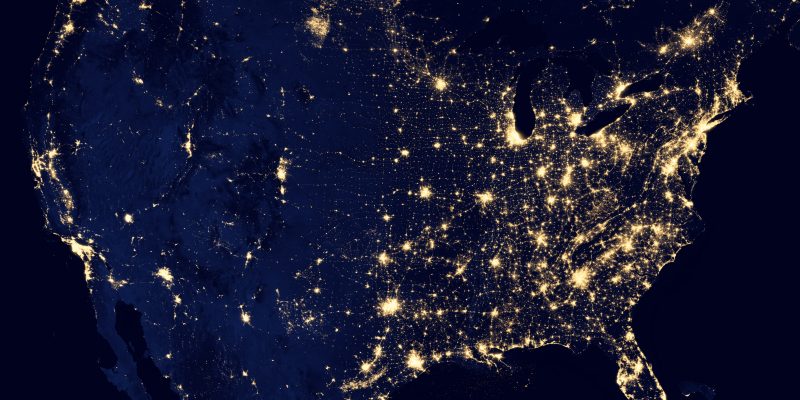 Lights At Night, Both Beautiful And Hazardous

Many people are lucky to live fulltime in Gardiner, while others come up for weekends from their lives in New York City. When asked why they come, these weekenders are likely to talk about the peace and quiet which repairs their frazzled nerves after the relentless beat of the city. In fact, the healing nature of this place, and others like it around the world, is a whole complex of different types of experiences. Step outside late at night and if the lights are off in the house, the sky is a tumult of stars, some sticking out so sharp, others dusted in an arc, and the mind, if open, is gripped in awe and wonder.

Not so much in a city. City lights are pretty when seen from a plane, but from the ground, they put out the stars.  Our eyes adjust to keep out the city’s glare and this blinds us to the stars to a degree. Artist Thierry Cohen has created amalgam photographs, superimposing the way the sky looks from a desert over the silhouettes of famous cities. Visit www.thierrycohen.com /pages/work/starlights.html to see what we are missing when we’re in a city—in fact, even Gardiner is not far enough away from populated centers to really see the night sky as it would be with no light pollution.

Fortunately, there is new awareness of the negative effects of light pollution and legislation is now attempting to roll back unnecessary luminal obliteration of the starry night sky. Artificial light at night has been proven harmful to many species, including us. For humans, nighttime light pollution is linked to reduced production of melatonin, increasing cancer risk. It also disrupts our circadian rhythm, and increases risk of obesity, diabetes, and cardiovascular disease.

For the leatherback turtles of Tobago, night lighting of the beaches causes hatchlings to follow human lights instead of the moon and stars, often to their death from various causes, and this is dwindling the population of that species. And scientists estimate that between 100 million and a billion birds a year are killed by collisions with manmade structures, largely due to the glare of manmade lighting. Bats, moths … the list of species being endangered by nighttime artificial lighting continues to grow as this subject draws more scientific attention.

Still, there are no easy answers; other factors complicate the search for appropriate solutions. Crime has been one cause of increased lighting of gas stations and other types of businesses operating at night. In England, Kate Painter has done a series of studies showing that improved lighting did result in reduced crime, so that the solutions to be found must balance multiple factors.

In 2013, France passed legislation which mandates that from 1:00 a.m. to 7:00 a.m, shop lights must be turned off; building lights cannot be turned on until sunset; and lights inside office buildings must be turned off within an hour of workers leaving the building. In addition to the health benefits, the main prize sought is a savings in energy cost estimated at $266 million per year. While this will hopefully lead a trend among other enlightened nations, the opposite trend—more lights on at night—is, at present, a much stronger one due to booming growth in affluence and urbanization in China, India, Brazil, and other rising nations.

The development of new, energy-saving lighting technologies has, to some extent, worsened the problem because the new energy-efficient lights shift emissions more to the blue end of the spectrum which, as writer/professor Paul Bogard points out, is what the brain has evolved to associate with the sign of dawn, sending mixed signals to the brain as it attempts to regulate all of the systems in the body.

A 2011 study by some of the leading scientists investigating light pollution found that the two best types of lighting from the standpoint of minimizing harmful effects to living things are low pressure sodium (best) and high pressure sodium (second best). The worst offenders, producing the bluest light, are Metal Halide and white LEDs. (We can certainly take this advice for the lights we ourselves purchase and leave on at night, protecting our own bodies and those of our furry and feathery friends).