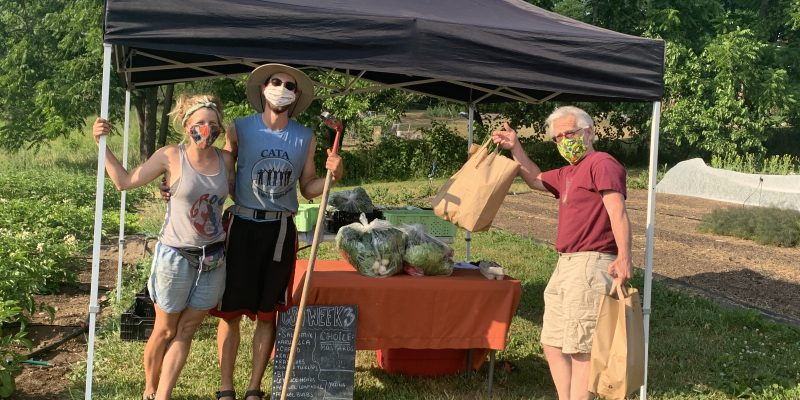 When the coronavirus hit in mid-March, it wasn’t entirely clear how Gardiner’s farms would fare. Farmers’ markets seemed at risk of shutting down completely due to safety concerns, and widespread economic peril meant customers might completely abandon local food.

But according to a handful of Gardiner farmers reached by the Gazette, that worry was quickly replaced by relief—even surprise. Farmers reported a notable increase in sales this past spring, whether they were selling at farmers’ markets, at their farm stand, or signing up customers online.

“It’s always felt that our farm store was considered to be more of a specialty shop rather than a grocery store,” she continued. “But the pandemic has done for us what years of educational efforts was never able to accomplish: people actually started using the farm store to source their food. Customers who used to buy one or two items started buying many more. Customers who used to come once in a while started consistently coming every week.”

Becky and her husband, Joe, asked their customers to shop at the store one at a time, to ensure social distancing, and they offered to pack orders for at-risk individuals. But otherwise their daily farm life continued on as usual.

Also during the spring, Leslie Lewis and Anthony Post saw a 40-person increase in sign-ups for their Second Wind Community-Sponsored Agriculture (CSA), an organic vegetable CSA they operate at Four Winds Farm on Marabac Road. In addition, they had to start a 50-person waitlist. Leslie said new members were motivated to sign up out of a desire for more food security, concerns about going to the grocery store, and having more time to pick up vegetables each week due to cancelled vacations and working from home.

Last year customers selected their vegetables from boxes when they came to the farm to pick up their weekly share, but this year pre-bagged shares are being handed to each customer for a grab-and-go, contact-free pick-up.

“It’s been a wild transition, with an increased need for labor, but it’s working out,” Leslie said.

Over at Kiernan Farm on Bruynswick Road, which raises grass-fed beef and pastured pork, Marty Kiernan said there was a “big uptick” in customers at the Westchester County farmers’ markets where he primarily sells his meats.

For a few weeks, the market in Nyack required that vendors only deliver pre-orders to customers, so that’s what Marty did. The two other markets where he sells, in Pleasantville and Larchmont, simply changed their on-site market protocols to ensure social distancing and other safety measures.

Marty said the dramatic increase in his meat sales was influenced by word-of-mouth referrals and concerns about coronavirus shut-downs at meat plants across the nation.

“During this whole COVID-19 thing we’ve done financially ok—we did not take a beating,” he said.

Close to Kiernan Farm, the family-run Whitecliff Vineyard, which grows the grapes for its own award-winning wines, had to initially shut down its tasting room and switch to pickups only. Their story is covered in the article on Wineries and Breweries, on page 8.

And over at Tantillo’s on Route 208, Jeannine Ridgeway reported that the physical layout of the farm stand had to be changed before the farm’s legendary ice cream stand opened on May 2nd.

According to Jeannine, who owns the ice cream stand, bakery, and farm market at Tantillo’s, people are now asked to stand in a single line for ice cream and stay six feet apart.

There are outdoor tables but no sun umbrellas. “It’s not that we’re mean, we just don’t want people sitting there too long eating ice cream,” she said.

The playground is closed, and people are discouraged from gathering in large groups. As of this writing, the vegetable portion of the farm stand at Tantillo’s had not opened yet, but Jeannine said the items there would be pre-packaged—for example, two zucchini would already be in a bag, already weighed, for a customer to pick up.

Despite all the restrictions, “We are extremely busy this year—and very grateful,” Jeannine said. “The customers are all really respectful and don’t mind waiting the extra time because everyone understands what needs to be done. Everyone understands that we’re all in this together.”