Gardiner has some real historical gems contained within its borders.  One of those is Locust Lawn, which is situated on what is today Route 32 and used to be known as the Newburgh-New Paltz Road. This frequently overlooked Federal style mansion, constructed by Josiah Hasbrouck, is a must see not only because of the magnificent mansion, but also the scenic beauty of the property and the Evert Terwilliger house, perched on the banks of the Plattekill Creek. Built in the 1730s, it is an example of an early stone house, and is also connected to the history of the mansion. 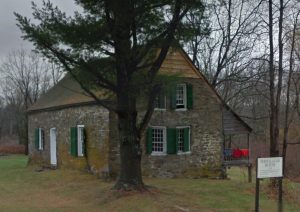 The picturesque but “cramped” Terwilliger House on the Locust Lawn estate

Josiah Hasbrouck was born in New Paltz in 1755, the great-grandson of Jean Hasbrouck who, along with other Huguenot families, founded New Paltz. Josiah spent most of his life living in the Jean Hasbrouck house on Huguenot Street,  where he ran a store. Between 1784 and 1805 he served intermittent terms as a Supervisor for New Paltz and, in February 1785, married Sarah Decker. Aspiring to higher office, Josiah relocated to Washington, D.C. when he was elected to the 8th Congress and served from 1803 to 1805.

When his father died in 1806, Josiah inherited the home on Huguenot Street and also purchased the Terwilliger home, farm, and mills on Route 32. This purchase took place in—according to Historic Huguenot Street, 1809 and, according to the National Register of Historic Places, the unlikely date of 1794—a discrepancy that points to the misinformation that exists in local history.

In any case, when Hasbrouck returned from Washington he  moved his family to the Terwilliger house. Already considered a wealthy man, the 1810 Federal Census listed Josiah as owning thirteen slaves and Hasbrouck did not intend on living in the “cramped” Terwilliger house for long.

According to tradition, Congressman Hasbrouck, was awe struck by the mansions near Washington, D.C. and wished his new residence to replicate the style, reflecting his wealth and accomplishments.  It is believed that Josiah hired Hendrick Schoonmaker to construct the home, which was built in 1814. Eventually, the farm encompassed over 1,000 acres.  Josiah Hasbrouck named his beloved mansion Locust Lawn, for the abundance of Locust Trees on the property.  He lived in it until he passed away in 1821, with his son Levi taking over that year.

Locust Lawn remained in the Hasbrouck family for over a century—as a primary  residence until the 1880s when Josiah Hasbrouck, Jr. died and then as a rental property—until, in 1958, the mansion, outbuildings, and Terwilliger House were given to the Huguenot Historical Society by Annette I. Young, the great-great-granddaughter of Josiah Hasbrouck. It remained part of the society until 2010 when the home, along with the Terwilliger House, was given to Locust Grove Museum in Poughkeepsie which had been founded by Young. 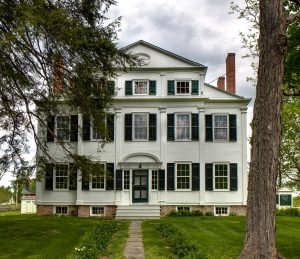 According to their website,  “The historic Locust Lawn Farm is a rare treasure filled with the furnishings, clothing and possessions of five generations of the prosperous Hasbrouck family.” It is currently undergoing restoration, but look at their calendar of events for the next open date (www.lgny.org/locust-lawn-farm). Locust Lawn is at 436 South Route 32 at the intersection of Dubois Road.  For information on tours, call 845-454-4500 x 211 or email  k.snodgrass@lgny.org.