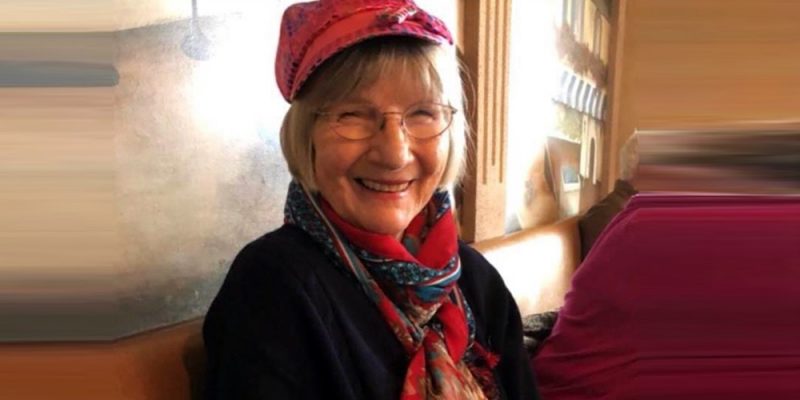 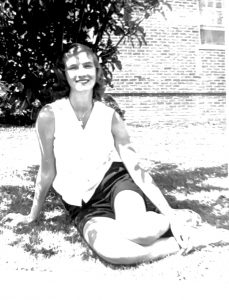 Mary Ann Osgood in her youth.

She was a Gardiner original, born at a time when one room schoolhouses dotted the town map. The year was 1941, and the United States would soon enter World War II against the Axis powers (Germany, Italy, and Japan). Mary Ann Osgood (nee Alexander) would grow up here in Gardiner, leave for a number of years, and finally return to spend her last years in her childhood home with her husband, Paul.

Until the end of third grade, Mary Ann walked to the red, one room schoolhouse on McKinstry Road. Then her parents transferred her to St. Joseph’s School in New Paltz, to which she rode the bus choosing to sit next to the only black girl. According to Paul, Mary Ann’s mother had told her that she shouldn’t sit with her, but Mary Anne said, ‘But I did. She was my friend.’

“Mary Ann was the liberal child and the rebel in the family as far as social issues were concerned,” Paul continued. She went on to graduate from New Paltz High School, which was then located where the middle school is now.

In an earlier interview with Mary Ann herself, she reminisced about her childhood, saying,  “My folks were both from farming families. My father came from a farming family in Maine and my mother from a farming family in Ireland. We had a big garden so we had many fresh vegetables in the summer. My mother canned tomatoes, peaches, and many other things. We had lots of squash. In the barn we had pigs, goats and chickens. We had milk from the goats and meat from the pigs and the chickens. They would kill a chicken and we would have Sunday dinner. We had a bread man who came and delivered bread. It was Wonder Bread. (She laughs.) It was in a waxed paper bag.”

Upon high school graduation in about 1960, she went on to SUNY Potsdam to study music. After graduation from college, she moved to New Hampshire and lived two doors down from Paul. They connected and married. “We were really attracted to each other,” Paul observed. “She was in a chorus but was a soloist. “She didn’t pursue a professional career in singing, although she could have done so.” Paul said.They retired after some years and decided to return to Gardiner in 1986. They bought out her brothers’ shares of the house she grew up in and lived there until her death in August of last year.

Soon after they returned to Gardiner, Mary Ann and Paul decided to buy the Gardiner Country Store building on the north side of Main Street in the hamlet, and opened an antique store which they operated for 17 years. (It was later sold and became Hi Ho Antiques.)

It was something she enjoyed. She always loved old things, and brought new life and usefulness to many things they came across in their own lives, from the farmhouse in New Hampshire that she and Paul bought because ‘they felt sad for it,’ to the many pieces she found in their Gardiner home. They sold the store because it tied them down and they couldn’t travel as often, or for as long, as they had previously done.

In more recent years, when I would see Mary Ann arrive at the weekly lunch gathering (pre-pandemic) called the Ritary, you could always see the glow on her face and hear the joy in her voice as she was uplifted by the company of her friends. “Although she lost her singing voice, she always had a wonderful speaking voice,” Paul reminded me.

Her daughter, Melissa Logan, wrote a beautiful description of Mary Ann’s active and fulfilled life. “Music was always in Mary Ann’s life. She was a music educator at several public schools in New Hampshire, and later struck out on her own as a private voice and piano instructor. She enjoyed community singing and sang in her church and community choirs. She was active in various musical styles, singing madrigals, folk, and classical music.

She and her husband, Paul, enjoyed being in many musical groups, including the St. Cecilia Chorus in New York City, where they sang Handel’s Messiah in Carnegie Hall every Christmas.

Mary Ann also directed the chorus at the “Singing Christmas Tree” at the South Street Seaport. Locally, Mary Ann was the music director at the Union Presbyterian Church in Balmville in the 1990s, and was the choir director of the Helen Baldwin Singers at the Unitarian Universalist Fellowship of Poughkeepsie until the very end of her life.

Mary Ann was also an advocate: for women, for education, and for the environment. She volunteered at the Rape and Assault Committee of Nashua, helping survivors of sexual assault re-establish their lives, and even testified on behalf of assault survivors at the New Hampshire state legislature. A passionate advocate for the environment, Mary Ann created and led the ‘Tree Huggers,’ a folk group that sang at local events.

Her volunteering and service to the community extended throughout her entire life, and in later years she served on the Gardiner Library Board and drove people to doctor’s appointments through Neighbor-to-Neighbor, an Ulster County Office of the Aging program.”

Her daughter Melissa concluded, “Mary Ann is best known for her friendly demeanor, her kindness and generosity, and her willingness to share her talents with everyone.”

Gardiner has lost a wonderful citizen and advocate, and I, like so many others who knew her, have lost a great and kind friend.