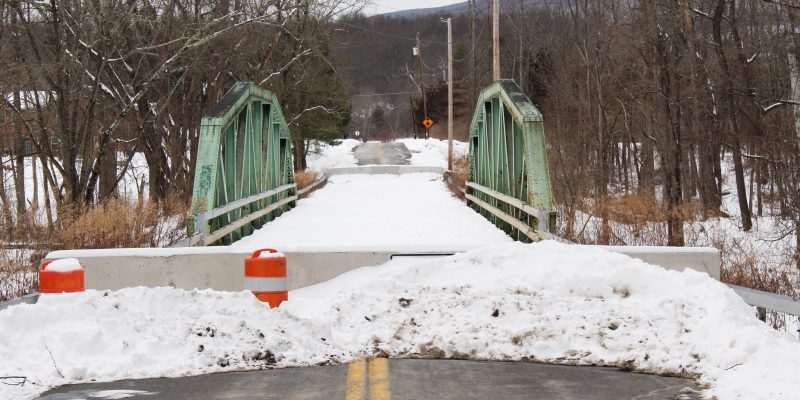 The signs arrived unannounced via Ulster County Department of Public Works (DPW) trucks and blocked each side of the McKinstry Road bridge.

This came in late summer of 2020, shortly after Andrew Emerich, Senior Engineer of the Ulster Country DPW, visited the site in response to red flags raised by the Department of Transportation (DOT), and deemed the bridge unsafe. Large trucks outweighing the recently reduced three-ton limit still drove over the already compromised structure, knocking loose the deck panels.

In fact, the bridge had been host to all manner of vehicles, serving as an access route to Burnt Meadow Road, or as a way to avoid Route 44/55. On weekends, stretch limousines, small tour vans, classic cars, and out-of-staters caravanned over it as they traveled the wine trail. Cyclists raced through, as did runners and neighbors walking their dogs. Occasionally, cars slowed down to catch sight of the Shawangunk river in its various stages of flood.

Now, the road is silent, except for the occasional car making use of the recently built turn-around, and a few walkers and cyclists who slip around the barriers.

Mr. Emerich also cautions against foot traffic; the bridge is not safe. This is the very reason his Capital Plan for the bridge, made prior to its closing, has been put on hold. The bridge’s integrity had already been under observation. Cracks in the asphalt had etched tectonic plates that had sunken in some areas and crumbled in others, and rust had eaten through parts of the steel beams. Hurricane Irene also inflicted damage, causing a temporary closing in 2011. Since then, the weight limit on the bridge has progressively decreased in tonnage: 20; 15; 3; Closed.

Initiation of the Capital Plan was expected to occur within a year. According to the plan, a hydraulic system needed to be designed that would make it possible to raise the deck for repairs and perhaps also expand its width. Now it’s questionable if that direction is even possible; the deck panels shook loose in such a way that re-connection may not be achievable.

This gives the bridge a precarious future and leaves the timeframe for completion indefinite. County trucks visit the site often, so rest assured it hasn’t been closed and forgotten. Turn around traffic has slowed considerably as drivers adopt new routes. And although the wine trail has not been derailed, through-traffic won’t be coming this way anytime in the foreseeable future. My maps app has not yet been updated, so it is no wonder an occasional pizza delivery shows up at the end of the road, confused because there was once a bridge there, and though the bridge is still there, it is CLOSED.