Gardiner Resident Bill Richards stepped out of his office at Skydive the Ranch on Sand Hill Road a little after 3 PM on October 18, 2012 and saw a bright flash in the sky. High above him was a cylinder-shaped translucent object that wasn’t moving. Bill called his two dozen employees in a nearby hangar to come outside and bear witness, and went to one of his helicopters that has a high-definition, built-in camera. 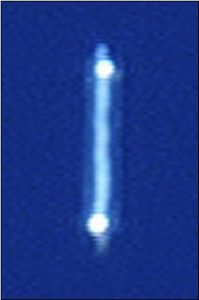 Translucent unidentified aerial object videotaped on October 18, 2012, between 3:15 PM to about 5 PM Eastern time high in the sky above Gardiner. Video frame © 2012 by commercial pilot and aerial photographer Bill Richards, from November 3, 2012, Earthfiles news report, “Another Mysterious Translucent Aerial Object, This One Over Gardiner, New York” © 2012 by Earthfiles.com and Reporter and Editor Linda Moulton Howe.

Like Kentucky resident Allen Epling, who had reported a similar siting two days before,  Richards stayed outside for at least two hours until some high cirrus clouds moved in. He accumulated fifteen minutes of high-definition video and remains mystified about what large, cylindrical object could remain in the same spot at a high altitude for at least two hours—and why?

“Something I had never seen in the sky before was up there,” Bill says. “It stood out because it didn’t move. Usually everything in the sky moves somewhere! It’s not feasible that this object could be stationary without some kind of propulsion! But in all my years of flying and observing, I have never seen an object like this. I say this is baffling!

Richards called Air Traffic Control. Planes coming from  Europe or Toronto travel down a jet way that comes by Albany and passes just about five miles west of Gardiner, at 12,000 feet. “I was more or less trying to warn aviation controllers that, ‘Hey, there’s something in the air near the jet way and it’s sitting there! And it’s a serious-sized object way the hell up there!’

“I told Air Traffic Control that from where I stand,  I don’t even know, maybe 25 miles. This is the angle, this is the compass heading. “  He heard them talking to airliners and asking them if they had seen anything out to the east, but never heard the airline pilots respond.

As far as Richards is aware, no one called police, fire or airports. “I’m the only one who called TRACON, which is Air Traffic Control in the New York sector. Nobody called me back. So I kept going on the internet; couldn’t find anything. Then I finally went to UFO sites and got this thing called Mutual UFO Network. We saw an article about Pikeville, Kentucky, and NBC and this guy, Allen Epling. I looked at his videos—that’s it—the same thing I saw!’

Bill Richards says the big question in his mind is why, at a time in which terrorism is at the top of the priority list of the U. S. Government, the authorities aren’t interested in high altitude, unmoving, unidentified aerial objects.

“I think they probably have a protocol that says, ‘If anyone sees anything Top Secret, just freakin’ deny it!’ He had already called the Federal Aviation Administration and says, “They weren’t even interested—nothing. They don’t want to know from Adam. That in itself may be seen as an order to remain silent. I would surely love to know what that thing was!”