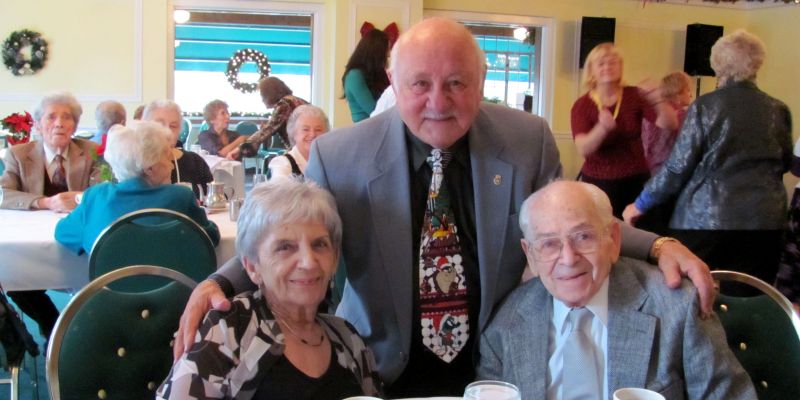 The New Paltz-Gardiner Seniors are a lively, active group, and if you are looking for something new to do, they ask that you join them.  They are a cheerful bunch, and they welcome new members, aged 55 and up.

I just crashed their winter dance, ostensibly to complete this article and get pictures.  I had a great time.  When I consider what might help preserve my vitality into my later years, should I be lucky enough to live that long, it’s apparent that dancing the Macarena with friends at 1:00 in the afternoon should be included on my agenda.

The party was at Stonehedge, in West Park; the venue was cheerful, the tables nicely set. Everyone was dressed up, the music was upbeat, and many people danced.  Several on the dance floor were over ninety. 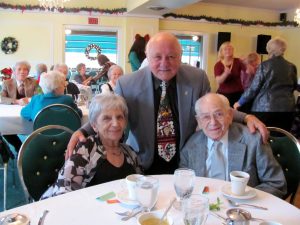 George and Carmen Goldstein, who have been married for 69 years, with George Wheeler (standing), at the winter dance. Photo: Laura Rose. For more pictures of the seniors visit us on facebook.

The group goes on trips several times a year and, though I’m not quite senior yet, I was invited on one two years ago. It was a great day and an amazing bargain.  We took a chartered bus to Lake George, got on a boat, had lunch and a cruise and then stopped at a shopping mall on the way back.  The ticket for the day was $30.

When they are not dancing, having luncheons or on outings, the seniors meet twice a month, on the second and fourth Wednesday, to review the work of their various committees, have a presentation, a snack, and time to socialize. Upcoming presentations are quite varied. 2013 will include a women’s acapella group, other musical acts, a dance group, authors, a master gardener and several local historians. Bella Zeines, who organizes the trips, says, “The speakers are very informative.  And it’s fun to sit down and talk to people with whom you have something in common.  It can be helpful, as well.  When we like a doctor, or a lawyer, we tell each other.”

The group was first formed in 1969. There are over 80 members now, but fewer are actively participating. “We had over a hundred several years ago… but our members keep dying off!” quipped Susan Tychostup, a past-president of the group. “I joined 17 years ago because I wanted to meet others of my peer group.  I wanted to be able to socialize with people with whom I had things in common.  I’ve stayed 17 years, so I must like it.  And there are others who’ve been in the group for much longer.”  (Margaret Coats, at 36 years, has been a member the longest.) Susan said, “Older people can become invisible to the young.  But we aren’t invisible to each other.”

It’s a terrible group!” joked Anne Korotsky.  “Joining was the best thing I ever did for myself.” ‘We look out for each other,” added Joyce Alexander.  Others were equally positive. Vita Halvorsan said she’d lived in Long Island for 16 years and never heard a word from her neighbors there, or met anyone.  “Now, I know everyone,” she says. “I love this group.”

Teresa (Tess) Feminella, who moved up from Greenpoint to be with her children, never learned to drive.  She says, “I made friends in this group. The ladies pick me up, and take me out with them. They always make it a point to include me.”  The New Paltz Gardiner Seniors form a valuable social network. Of their “Sunshine Committee,” Gardiner resident Laurie Willow said, “When my mom, Adele, had several strokes and developed senile dementia, she and her full-time companion Myroon were no longer able to attend meetings. The seniors visited Adele and Myroon at home as well as sent cards.  When Adele passed, they came and “sat shiva” with us.  [the Jewish tradition during  bereavement].“  It made all the difference!”

The group also does charitable work. Each year they offer two scholarships to Ulster BOCES Adult LPN Nursing students, and at each meeting they collect food for the St. Charles Food Pantry in Gardiner and Family of New Paltz.