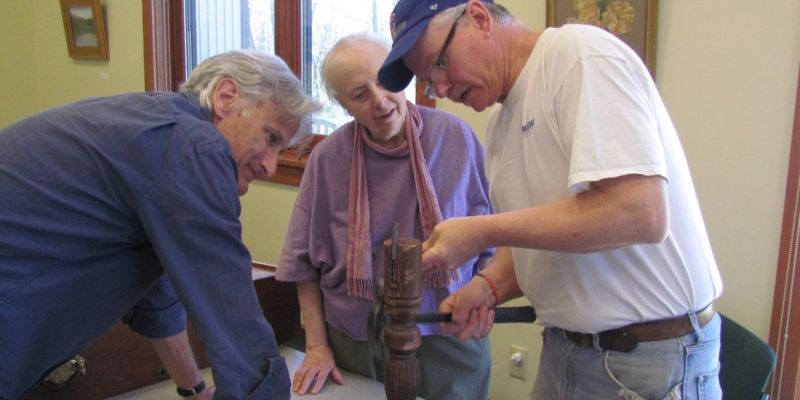 Repair to the Repair Café

A lovely Sunday in August, at the vibrant Gardiner Library, but something was different. Something fun was in the air. What was it? Our old friend, The Repair Café, started here in the Hudson Valley by the activist John Wackman, who sadly left us too soon, was rising like a phoenix from the ashes of quarantine. Repairable objects and their owners rejoiced as did the locals who were there to offer free repairs. Really, all who appreciate the value of reuse and the importance of community love The Repair Café.

I think that many agree that we are in a climate crisis and at the intersection of conspicuous consumption and the moment at which extraction of petroleum has reached a rate greater than that at any time in the past or future. Yet, while the gross domestic product (GDP), basically what we as a nation produce and sell, matters, so does the Earth. People often say, “They don’t make ‘em like that anymore,” and it’s a true statement. The reason? Built-in obsolescence, which while good for jobs, corporations, and profits, is not good for the Earth nor for the consumer who must settle for buying less well-made items while replacing them more often.

What the Repair Café does is break the cycle of throwing things out and buying new, and like Santa’s workshop, its success depends on a team of eager repair elves. For example, Eric Hoover repaired a vintage Tensor desk lamp with a light that wouldn’t stay upright. Through trial and error, the issue was solved and the lamp lives on. Then, there was Patrick Murphy, who worked on a Viro battery-powered scooter until it was working again. The list of things repaired was long and varied: Tools, electrical items, all manner of things screwed, glued, nailed, sewed, and wired. And if all that were not enough, Don Grice was there working hard at restoring vintage photos!

Kim Mayer of Climate Smart Gardiner and the Gardiner Democratic Committee stated, “We need to embrace the 5 R’s”:

Ana Lynn, who is also the creator of the Buy Nothing New Paltz group on Facebook, cheerfully manned the check-in. But the most heart-warming moment was seeing Holly Shader, John Wackman’s surviving partner, performing jewelry & sewing fixes while running the event, a continuation of John’s legacy. She said, “This was the first Repair Cafe since John’s passing and an expression of his love for his community” And vice versa, we say! Visit repaircafehv.org for future dates.