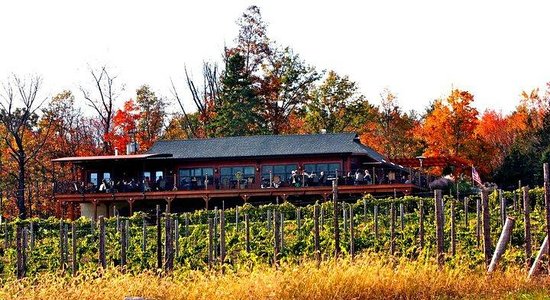 Harry Robibero delights in sharing his plans for Robibero’s Family Vineyards, the 42-acre winery on Albany Post Road that he and his wife Carole now run with the help of their daughter Tiffany and Tiffany’s fiancé, Ryan Selby.  Most of us know the location as Rivendell Winery but, in fact, the Robibero’s have owned the property since 2003; they rented it to Susan Wine and Robert Ransom, who managed Rivendell until 2008, when they decided to move on.  “We always were waiting for the opportunity,” Harry Robibero muses.  Operating a winery was a long-held dream of the family, so when Carole and Tiffany pledged their support, the decision was made.

As a child, Harry grew grapes and other crops, and made wine with his Grandfather Tony and his cousins.  He and his grandfather competed as to who could grow the tallest, sweetest corn.  The memories were as sweet as the corn.  “I did have a good feel for it as a young child,” volunteers Harry. “Our hands were always in the dirt together.”

Harry describes the wine courses, heavily weighted with chemistry, that he and his future son-in-law now attend.   “Half of the excitement is the learning,” Harry enthuses. Cornell Cooperative Extension has been supportive as have other local vineyards.  The plan is to eventually cover the property with vines.  A contractor by trade, Harry did the entire renovation with the help of his crew and a brother who is a plumber.  The quality of the workmanship is evident as is the pride Carole and Harry have in the result.  Carole is working on decorative plantings with a landscape architect and visualizes three vine-covered wrought iron arches leading up the driveway.  The continual expansion of the vineyards, as well as the construction of a 2,000 square foot wine cave, a pond, and a program that allows customers to make their own wine—pick and press the grapes, bottle and label the wine—are all planned for the future.  Carole also talks about the possibility of a B&B someday.

Harry and Carole tell a delightful story.  Gardiner’s own Jewell Turner, assistant to Building Inspector Hank Vance, lived on the property with her family as a child.  She particularly remembers the floor in one of the houses on the property; she learned ballet on it.  Sadly, the house was in such disrepair that it had to come down, but Harry Robibero knew the story.  He saved a piece of the floor and used the salvaged wood to craft a wine box for Jewell.   The gift, of course, delighted Jewell, and the story still brings tears to Carole Robibero’s eyes.

Carole and Harry currently live in Westchester, where they raised a son and two daughters, but they plan to build a home on the winery property in Gardiner.  “I like the beauty and the slow pace here,” Carole adds. They are looking forward to hosting weddings and other celebrations on the 90-foot winery deck and already have a 103-person engagement party planned for July and a wedding booked for 2011.  The wedding will require a catering kitchen, and building one is also part of the plan.

When asked what he finds most enjoyable about running his own winery, Harry smiles. “You should see Carole interacting with the customers.  I enjoy her enjoying the people.” One is left with the strong feeling that Grandpa Tony is smiling, just the way he used to when his grandson won the family competition and grew the tallest and sweetest corn.