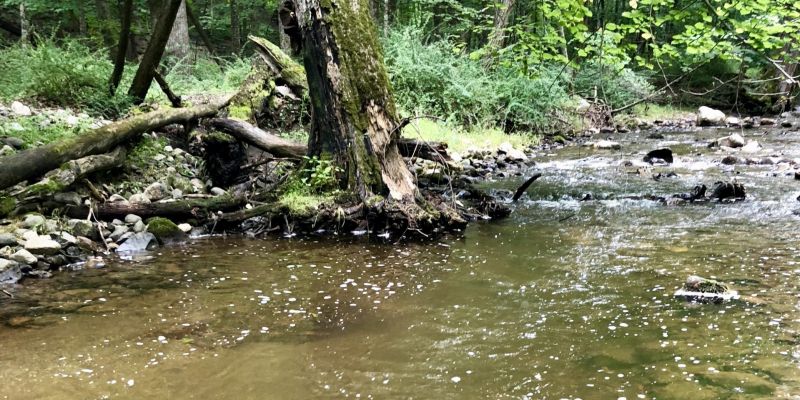 In a time before time was measured, or scale calculated, or motion observed, shale, then rock, surged and folded, creating the Shawangunk Ridge. Glaciers advanced, cleaving channels in the stone. When the Ice Age ended 12,000 years ago, the Wisconsinian Glacier receded, exposing the crevasses left behind. Gravity-borne meltwaters within chiseled further downward, carving the protective corridor of the Palmaghatt Stream.

The upper Palmaghatt, whose name derives from a Dutch mashup of palm (meaning “hand”) and gat (meaning “gap”), is intact on its course through the surviving primeval forest. (Every 5 years, the National Forest Service deploys scientists to assess its health and measure old-growth hemlocks therein, whose ages exceed 400 years.) It is a place so lush, so enchanting, that it is easy to imagine the head of a Brontosaurus emerging from the flora.

Coursing southward the Palmaghatt carried indigenous life forms and nutrients in its cold currents, for vital deliverance of ecological bounty from the ridgetop to the valley waters and riparian banks of the Shawangunk Kill, to the Wallkill, and onward to the mighty Hudson: brown trout, creek chubs, tessellated darters, stoneflies, mayflies, and oxygen.

The furtive, the swift, the shy and darting in the stream are less visible but equally crucial to nature’s balance as are the apex animals of land. Tiny Lives Matter!  Their survival in the Palmaghatt depends on the flow and temperature of its waters, now provided by rainfall, small rivulets, and seepage from upslope wetlands. Truncating the stream is lethal to its unseen inhabitants who require cool water to live. Downstream watercourses and species are, furthermore, denied the upstream nutrients and gene pool upon which they depend for optimal function and reproduction (contending simultaneously with unhealthy detritus from Tillson Lake and pollutants from the decaying dam). Last summer, the Palmaghatt averaged 60°. The lake, nature not taking its course, its halted water heating, was an astonishing 80°.

The dam was built to increase real estate profit by providing a recreational lake, likely without malice (or laws that would now prevent it). The environment was on few peoples’ radar back in the day. But global warming provoked a huge attitude adjustment from “Say what?” to “So what?”  to “Uh oh!” to “What now?”

Guided by a new ecological conscience, we can revise our priorities. Unlike that Brontosaurus and those fragile aquatic lives, humans have options. Tillson Lake offers undeniable delights but other lakes are nearby, and natural wetlands too, where the sweet critters of its environs can thrive. We must compassionately transition from “Our lake is fun, fix it,” to “The stream is sacred, save it.”

The Palmaghatt, gifted by glaciers: to wade in when it’s hot, behold the hypnotic movement of liquid beneath ice in winter, watch salamanders scurry in the spring, and, in quietude, listen for the trill of its gliding waters.

Gardiner residents can contact the Palisades Interstate Park Commission (PIPC) at njpalisades.org/pipc.html or 845-786-2701 urging them to conduct an objective study comparing environmental benefit and loss and asking them to provide a transparent budget for restoring and maintaining the Palmaghatt Stream vs. repairing Tillson Dam. A healthy natural stream maintains itself.