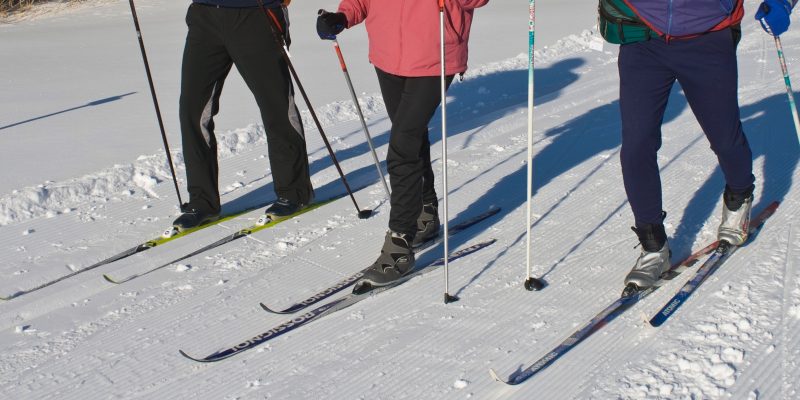 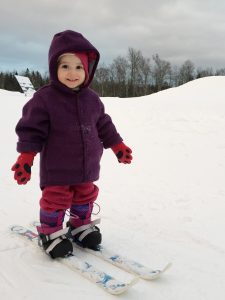 The Gardiner area, affectionately known by outdoor enthusiasts as “The Gunks”, is well known for rock climbing, biking, and hiking. Cross-Country Skiing is perhaps the lesser-known sport of our region, though its history here is no less lengthy. And, in large part, due to the dedicated enthusiasts of Shawangunk Nordic Ski Association (SNSA), a Gardiner-based non-profit with a mission to “promote and support all aspects of cross-country skiing in the Shawangunk Mountains and surrounding Hudson Valley Region”, skinny skis are making a comeback.

Its co-founders and primary drivers, Mark Ruoff, Veronica O’Keefe Ruoff, and Eric Weigeshoff, all reside in Gardiner. In a recent interview with Mark and Veronica (who you might recognize from the Mountain Brauhaus Restaurant) the duo brimmed with enthusiasm and recounted how over the past few years there has been exponential growth in attendance at the ski clinics and races they organize each year (snow and Covid permitting). SNSA works closely with Ann Gregory, coach of the New Paltz High School Nordic Ski Team, to coordinate these events. Mark is Assistant Coach for the team. Both New Paltz and Wallkill High School students assist with the clinics and show up to race. The ages of attendees span all generations, from small children up to very senior citizens.

In 2014, local skiers were incentivized to organize by their desire to see improved snow grooming conditions in our region. “Snow grooming” is the process of moving, flattening, rototilling, or compacting snow into tracks or fields to facilitate safe & pleasurable skiing. SNSA has since advocated extensively for this cause. In 2019-20, the organization was awarded a ‘Fischer Access and Engagement Grant’ to bring trail grooming to Open Space Institute’s (OSI’s) River-to-Ridge Trail (R2R). With support and additional funding from OSI, along with donations from local businesses and community members, SNSA acquired grooming equipment, which is now in operation, mostly with sweat equity by Mark Ruoff himself and Peter Karis (OSI’s Vice President for Parks & Stewardship, who oversaw the creation of the R2R trail).

When asked which are the “Best Ski Trails” in and near Gardiner, they opined that Minnewaska State Park, Mohonk Mountain House and Mohonk Preserve are all on their “must ski” list, and snow conditions often dictate the destination. They also gave kudos to Minnewaska for the “spectacular job” they do grooming each season, and to local gear suppliers EMS (Gardiner) and Rock & Snow (New Paltz) who do their best to supply our community with ski equipment and gear.

We also discussed the challenges of skiing in “multi-use” trails such as R2R, where the various “users” can step on each other’s toes… or in this case, trails. For proper winter trail etiquette, all non-skiers will want to avoid stepping on groomed ski tracks. Snowshoes, hiking boots, fat-tire bikes, and even dogs can cause breaks in these groomed areas that result in safety issues, particularly as the snow freezes later in the day. If a skier in a groomed track accidentally hits a frozen rut, the skier may fall and get seriously injured. To avoid these hazards, all non-skiers can walk next to the ski tracks, toward the side of the groomed trail, use designated snowshoe trails, or make their own tracks on or off-trail in a fresh snowfall. In Colorado, after the general public ignored repeated warnings, some ski trails have been closed to hikers during the 3-month, ski season. A local organization like SNSA can do much to increase community access, engagement and education, and Gardiner residents can be very proud to support the work they do. For more information about Gunks Skiing and SNSA, go to:  skithegunks.com or Shawangunk Nordic Ski Association on Facebook.