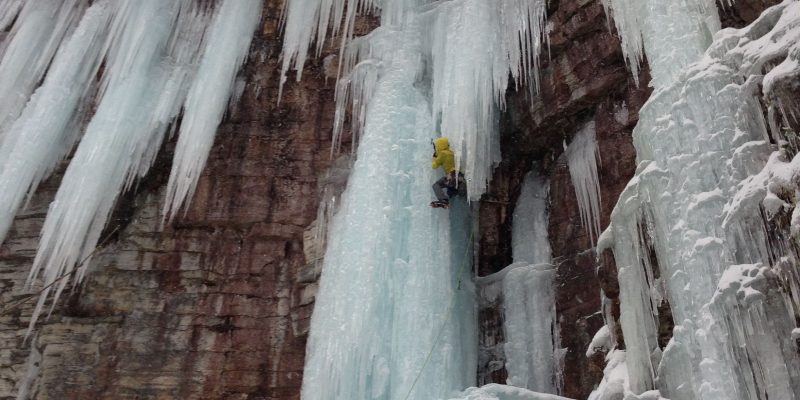 Some Folks Enjoyed The Winter

Dani Pendino and Dora Yordanova have been trekking from New York City  to Gardiner as climbers and hikers since early 2000. Two years ago, they moved to Gardiner.  Like many people who settle in Gardiner, they fell in love with the Ridge.

They are active in several of the many modalities available to enjoy the Ridge.  Dani and Dora ride mountain bikes, climb, hike and ice climb.  This past winter was touted as one of the best ice climbing in years. When many of us were complaining about the cold, Dani and Dora were ecstatic. The trick, they say, to finding great ice climbing is that you have to be close by; suitable climbing ice is a moving target, and conditions can change tremendously in a day.

On a possible climbing day, you have to check it out in the morning. If there was a flash freeze overnight, the ice might be good for a few hours.  If it’s sunny, sheets of ice can separate from the rock. Cloudy weather is good because the ice lasts longer. “You have to time it,” they insist. One day it will be great, then, with a little afternoon sun, the opportunity has passed. This year in early January in the Near Trapps, ice formed at night a few times then fell apart.

In a good year there are only about 10 routes available to climb. Each climb demands different gear depending on what sort of ice forms.

Clothing and gear are expensive and specific. A helmet and ice screws are just two of the many necessities. If the ice is forming, it may be good for four or five days or you may not be able to go out the next day. How long it stays is an unknown, but Dani and Dora say you just climb what forms, and work with what nature offers that minute. It demands skill and commitment.

Dani and Dora both admit this winter was one of the crazier ones. On the coldest day this year they climbed “Broken Hammer” in the Trapps. They started up when it was 12 degrees below zero and watched it go up to zero in two hours. They wore a lot of protection that day, including the ever important ice gloves, and climbed both ice and rock that day, lasting until dark.

Often Dani and Dora climb with their buddy Kevin Delaney, who doesn’t shrink from leading. Kevin’s out here every winter too and lives his life around what is happening with the ice. He has an amazing depth of intimacy around nature, which is a prerequisite for ice climbing. Nature can be fickle; the ice can be there and then not. There are many ice conditions, and people need to know what to do in each situation. There are guides available if you are inclined to experience this exciting sport.