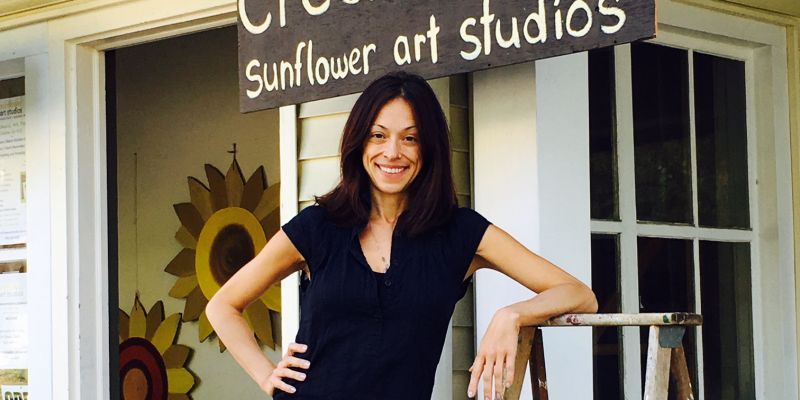 The first Sunflower Art Festival, held in August of 2015 at Tuthilltown, was not intended to be the start of an annual event. It was, instead, a spontaneous effort by festival founder Liz Glover Wilson to honor her only sister, Esther, who had died suddenly not long before.

A tragedy is “a powerful force,” she says. “It shakes you up and brings both positive and negative changes.” One of the positive changes for Liz was a close look at her life. “It makes you ask, ‘Who am I,” and what do I really want to be doing.”  Liz knew that she loved community and she loved art, particularly accessible art, and the idea for the festival emerged as an honorary 40th birthday party for her sister.

“It was a passion project,” she says. “I’m not known here.” (Liz has lived in Gardiner, on Halcyon Road, only eight years.) “But I had vision, heart, experience (as an event producer) and some savings.”

After putting in the not inconsiderable organizational work, she had no idea if anyone would show up. “If five people come, that’s fine, and if 500 people come, that’s fine too,” she said to her boyfriend, local topiary artist Keith Beussing. In fact, 2,700 people came that first year. In the face of such numbers it’s hard not continue; the Second “Annual” Sunflower Art Festival was held at Tuthilltown in August, 2016, and was a similar success. It appears to be off and running.

In the year since the first festival, the tapestry of riches that Liz Glover Wilson brings to Gardiner has exploded. Sunflower Art Studios, currently located at 120 Main Street in the Hamlet, offers a “Creative Kids” program of weekly art classes for children Kindergarten through fifth grade, and monthly weekend classes for kids who are either overbooked during the week, or who only come to Gardiner with their families on weekends. Creative Kids will soon be adding sessions for 6th to 8th grade, too. Classes, taught by Andrea Stetson, a New Paltz resident with 24 years of experience in early childhood education, are modestly priced at $25 per class. The fee allows the studio to provide canvas, paint and healthy snacks for the kids as they come off the school bus, which drops them in front of the building. “Accessibility” is a word you will hear over and over when talking to Liz, though, and $25 should not be what keeps an interested, talented child from attending. “We just had a couple of local businesses step up and contribute to our scholarship fund,” she says. “For $100, a child has a chance to reap the benefits of an art class.” There are also two completely free art days each year at the Gardiner Library.

Community is another word that comes up over and over at Sunflower. “Our website is www.sunflowerartstudios.community,” Liz says. In fact, it’s our slogan: We’re not a dot com, we’re a dot community.” Accordingly, Sunflower Art Studios also offers Community Yoga classes for nine dollars, taught by local instructors like Gardiner resident Peter Beuf, and a program called “Sipp’n Creative,” art classes for adults held at local venues like Whitecliff Winery and Tuthilltown Spirits. The name says it all; you get to sip the local brew and paint at the same time.

Finally (at least for now!) Sunflower Art Studios has initiated a “pop-up shop” of local hand-crafted jewelry, pottery, napkins, quilts, clocks, fine art, scarves, gloves, hats and so on. It is “popping up” at 120 Main Street from 11:00 to 6:00 every Saturday and Sunday for the foreseeable future. “It’s a small space so we rotate the work of different artists through,” Liz says, “but that is also great for repeat visits. What you saw there last week is not the same as what will be there this week.”  It works for everyone.  Artists get to showcase and sell their work and local residents have a place to buy gifts or needed items for themselves.

Asked what her vision is, what she sees when she looks out ten years, she says, “A beautiful community center.  A sanctuary for art and yoga, and a festival to honor art and the area.”  She thinks for a minute and adds, “I can see it.”