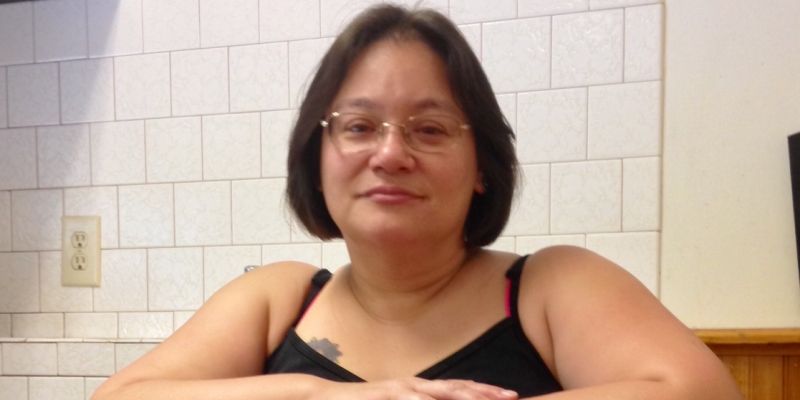 “Sausage, egg and cheese;” “Two light, no sugar;” “Double egg, bacon and cheese.” Ireland Corners General Store opens at six AM and most customers at that hour are regulars, so manager Brijesh “Bridge” Patel and long-time employee Lee Ackhart, a compact bundle of energy with short, dark hair and smiling eyes behind wire rimmed glasses, know what each will order and have it in process as soon as they see them.

When asked how she and Bridge know what nearly everyone wants, Lee’s response was, “Repetition, repetition. We make the same things for the same people every day. Ninety percent of the time in the morning, I know who’s coming in by their car, and we have their coffee on the counter when they come in. I have my nice picture window behind the grill so I can see everyone coming and going.”

Born in Staten Island, Lee’s family moved to New Paltz when she was five. She’s been here ever since. Lee said, “I’ve been at Ireland Corners nine years. I like the people and I like what I do.” She took classes at the Culinary Institute and is in charge of cooking.

Lee described the early morning routine: “I’m supposed to be here at 5am, but it’s often 5:15. First thing, I turn the lights and the coffee on, then turn on the grill, put the muffins, turnovers and pockets in the oven. After me, Bridge shows up, usually about 6am. He lives upstairs.” (Despite the last name, Bridge and Ireland Corners General Store owner Pete Patel are not related.)

“Usually the first customer is Charlie Eidel, for his coffee and paper. Then Jamie Depuy, then Rod Gulbrandsen and Coach Bill Freer. The door doesn’t open technically until six AM but for the COs [Corrections Officers] we’re here 365 days a year; they can call at twenty of six and order sandwiches. It’s just a courtesy,” Lee said.

Lee added that if there’s a big fire at night, they’ll call Pete at home. “He’ll send Bridge down to put the coffee on for the Fire Department. It could be four o’clock in the morning . . . he’s here. During the microburst in mid June, with so many trees and wires down, we made sandwiches at night for those involved, and last winter, when we had those bad snowstorms, people were worried about the highway crews having coffee. So we left the coffee on all night, and Bridge was here if they needed anything else.”

Brian Stiscia, Gardiner Superintendant of Highways and First Assistant Chief of the Fire Department, confirmed, “Ireland Corners has always taken care of us. At all hours of the day or night they’ll come in and make sandwiches and coffee. Pete Patel has always been gracious about donating food and supporting the Fire Department in so many ways.”

Lee has also worked in all the New Paltz schools as a floater for the kitchens. “I never actually left Ireland Corners when I was there—I did weekends and holidays—I’m a glutton for punishment. Pete tells me it’s my social life.”

Even so, Lee found time to raise  a family. Her oldest daughter, Jordan, graduated last June from  New Paltz High School and BOCES Vo Tech. In the fall, she will go on to SUNY Ulster. Since she was five she’s known she wanted to be an elementary school teacher, with a focus on special ed.”

Lee’s second daughter, Cody, will be in eighth grade this fall. Cody has aspirations to become a graphics designer, but in the meantime is heavily involved with Girl Scouts. She also plays clarinet in the school band and is learning guitar. She also enjoys gardening, and was asked to continue helping with the middle school garden over the summer.

Lee Ackhart, who’s been at Ireland Corners for nine years, is one reason customers keep coming back and things work so well when busiest in the early morning. No matter how early and what the circumstances, she’s invariably cheerful. It’s a rarity these days, and a very welcome one.