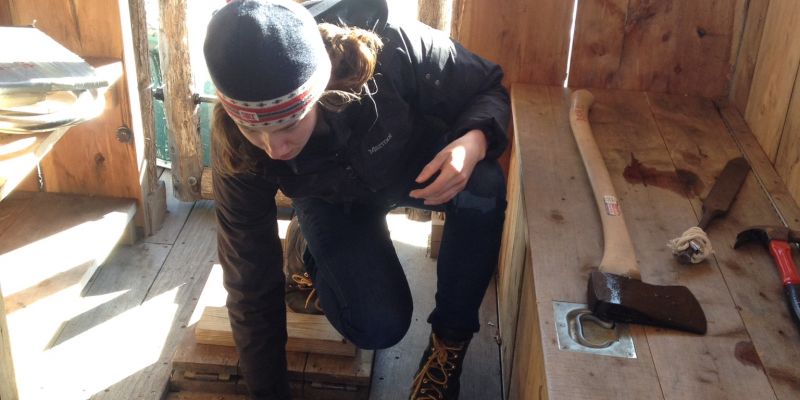 That Was the Winter That Was (Or Was It?)

Last winter? Snow. It never went away and it kept coming. Worst winter ever. But was it really? Actually, no. We thought we’d ask John Thompson, Director of Conservation Science, and Hallie Schwab, Citizen Science Coordinator, at the Mohonk Preserve, who also manage the Mohonk Lake Cooperative Weather Station in the Daniel Smiley Research Center on the grounds of Mohonk Mountain House. John gave us some background. “What we’re engaged in is observational science in the tradition of naturalists Henry David Thoreau, Aldo Leopold and Daniel Smiley. Because these people maintained detailed and accurate records, we’re able to look back and analyze the effects of climate change on our plants and animals.”

A variety of weather readings have been taken at Mohonk Lake, daily since January 1, 1896, mostly in the same locations and with the same or similar equipment. “There’s generally more snow up here than in the valley,” John pointed out and Hallie added, “But since cold air tends to settle in the valley, we often hear reports of colder temperatures from our neighbors at lower elevations.” Nonetheless, a hundred and eighteen years of daily records at Mohonk should be a reasonable relative proxy for events in Gardiner.  Actual snowfall (November 2013-March 2014) was 69.7 inches, which put it above the average season of 44.8 inches, but well below the 1995-1996 record when 123.5 inches were recorded—the most in the past 118 years.

So why might we think this the worst year ever? “In recent years, a number of snowstorms changed over to freezing rain and we’d lose a lot of the snow pack or get warm periods between storms so we’d end up with a lot of bare ground. But this year we had extended cold so the snow remained on the ground,” John noted.

Outside the Research Center, on a patch of yard sheltered from wind, John and Hallie take the daily reading. From November through February there’s been snow on the ground 66 out of 120 days—a “bare ground” percentage of only 45%—that could have contributed to the it-never-went-away syndrome. Snow fell on 31 of those 120 days.

The depth of Mohonk Lake is measured from a notch in an I beam which overhangs the lake at the base of the Mountain House. At its center the lake itself is about 62 feet deep and testing its water in winter is more like preparations for ice fishing. A trap door in the wharf opens on to a rectangular hole in the ice through which Hallie drops a water collector, whose rope is marked at 20 and 40 feet where water samples are taken for temperature and pH testing. An axe and other implements are used for maintaining the opening in the ice, and the thermometers used are not that different from those first used in 1896.

For consistency, lake samples are collected within the same time frame each morning and afternoon and weather readings are taken between 4 and 5 PM. When she had finished, and packed the water sample bottles away, Hallie said, “This may seem like a chore, keeping up this water and weather monitoring day after day, but there’s a sense that we’re carrying on a tradition that’s larger than any one of us.” Hallie went on, “Sure, you could automate much of this, but unless you’re out there you miss hearing the first song of the Hermit Thrush in the spring, or the day that red maple buds are bursting.”

There are many opportunities to get involved with research and ecological monitoring through the Preserve’s Citizen Naturalist Program, whether you’re interested in weather and water, birding or phenology—documenting the timing of natural events. For more information, contact Hallie Schwab, hschwab@mohonkpreserve.org or John Thompson, jthompson@mohonkpreserve.org or phone 845 255-0919, Extension 1271.