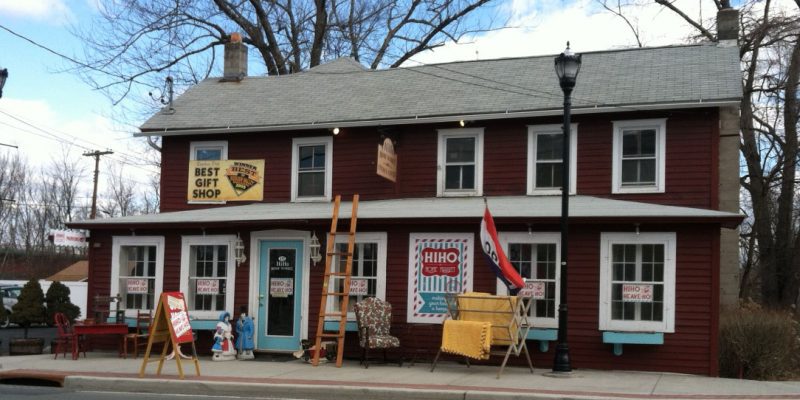 The Changing Face Of The Hamlet

Gardiner’s business section is undergoing a major transition.  The most recent and most visible change is the closing of the HiHo Market on April 1st.

What is the fate of 123 Main Street now?  The building has been bought by Patsy Iovieno of Pasquale’s Pizzeria. Patsy says he is not sure what he will do with it, but that it will probably be torn down eventually and possibly replaced with a mixed use building consisting of a storefront on the lower lever and apartments upstairs. The only zoning law in Gardiner’s code that deals with architectural standards (§220-5 Siting and Design Guidelines) is advisory rather than legislative. While it encourages development that is compatible with the existing character of the Town, it is solely at the discretion of the owner.

This building has been an anchor on Main Street for decades. George Majestic has childhood memories of his dad’s hardware store and post office being located in the building next door, which is now a parking lot. Half of that building was the garage for the one piece of NYS road equipment. The actual antique store was Floyd and Mildred Mckinstry’s sundries and butcher shop. The Mckinstrys lived upstairs and had a soda shop and candy store up front. On the right were the magazines and knick knacks.  The butcher shop was in the back. You gave your order, and Floyd or Mildred would go into the back and cut your meat. When George Majestic senior moved the post office to its current location, the small building next to the antique store burned, and was not rebuilt.

After the McKinstrys, the building became an antique shop, and has served 50 years more or less in that capacity until the present day, under three different owners. Heidi and Richard Haddard bought the building in 2005, and have run HiHo market there for nine years. On their Facebook page, Heidi says “It was April 1st, 2005 and we were thrilled. It was the day we purchased 132 Main Street, the home of HiHo. A lifestyle choice for our young family, buying a piece of Main Street was our way of contributing to the growth of Gardiner’s Hamlet, teaching our children about the value of community pride and following my passion.”

Meanwhile, the Gold Fox Restaurant at Ireland Corners has been sold to Bill Richards of Skydive the Ranch. Bill also owns several buildings on Main Street (44/55), including the very large building next to Station Square that has sat empty for over ten years. Evidently, the building inspector shut the renovation of the building down in 2004. The building permit was cleared and reopened in February of 2005, but no further work has occurred there since.

Then there is the restaurant that Suzy Eckhardt renovated from scratch at 128 Main Street, hoping to attract a restaurateur to fill it. That building is still waiting for its rescuer to come along.

And, of course, there is the old library building, owned by the town and empty since the library moved into its new digs in 2008.

When all is said and done, what will the new Gardiner Hamlet look like with its beautiful new sidewalks?  Will it be charming and inviting to guests?  Will it be interspersed with vacant buildings? Only time will tell, and it will be greatly influenced by the owners of the buildings, and the support offered them by the rest of the citizens of Gardiner.