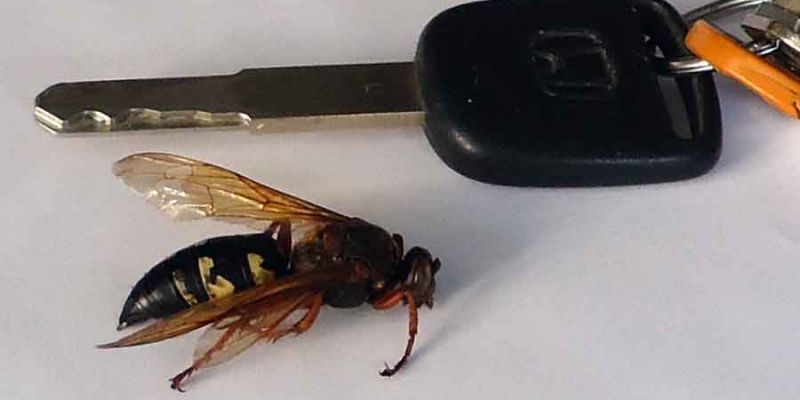 The Cicada Killer Wars: We Won (And then Lost…) (And We’ll Win Again) 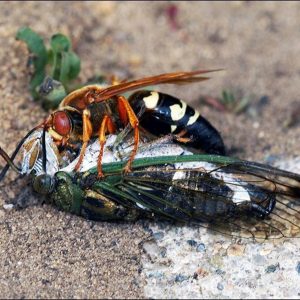 A cicada killer and a sedated cicada.

That’s a cicada killer over there on the right. They are ground-digging wasps that feed on cicadas and they’re approximately the size of full-grown cattle. Well, maybe they only seem to be when they fly in your face. They are, you see, “harmless,” (they only sting if you step on them) but aggressive (that flying-in-your-face thing).

We saw the first cicada killer on our property in Gardiner about ten years ago. Piles of freshly-dug soil began to turn up at the far end of the back lawn. The wasps flew low over the ground and then swooped off with vigor into the surrounding tall trees. Each returned, heavy as a B-52 bomber, with a sedated cicada in their claws and dropped expertly into their burrows. Research told us that the sedated (not dead) cicadas were being placed next to the wasp eggs so the larvae would have something to eat when they hatched.

Live and let live was obviously the correct approach— “harmless,” after all—and  only around from mid-July until late August, when the adults had laid their eggs and died. Plus, scary as these huge wasps were, there were only a few.

By the second year, there were more than a few. By the third year, there were hundreds. Family parties became scream-fests, with children, and more than one adult, running in terror. The crew that mows the lawn came to our door with fear in their eyes to tell us about the wasps. I started tucking my shirt in when walking outside (just imagine the possibilities). I even read about a woman in Pennsylvania whose mail the post office refused to deliver until she did something about the swarm of cicada killers around her mailbox. (Neither snow nor rain nor heat nor gloom of night …but cicada killer wasps? Nope.)

I called an exterminator, but of course they wanted to do what exterminators do, and we have a dog, so pumping powdered insecticide into each burrow didn’t sound like the answer. Clearly it was up to us to figure it out.

To the ramparts! To the internet! Apparently, you can stick white plastic knives in the burrows as markers during the day, go out with a flashlight after dark, find your white knives, and pour boiling water down the holes. Never mind that you are eaten alive by mosquitoes and gnats, that you must ferry kettle after kettle of boiling water out to the lawn without scalding yourself. Never mind that we’re talking 50 or 60 burrows. We did it.

Or, you can pour bleach down the holes. Yup. Tried that.

We resorted to savagery: long-handled butterfly nets—swoop, stomp, swoop, stomp. We took turns. “I got 26 today.” “Only 10 today.” “31 today!” My husband tried a squash racket. The neighbors thought we were mad crazy, out there in our bathrobes, coffee in hand, swinging like mad. It became a leisure activity.

Need I say that not a single one of these methods made the slightest dent in the cicada killer population? By the fourth year the cicada killers had colonized the entire back lawn, right up to the deck. They flew in our faces while we were sitting quietly with a book or a drink of wine. Some burrows were starting to turn up on the front lawn.

And then, a brilliant idea; I had about 15 yards of mosquito netting. We spread it over the lawn after dusk, weighting the edges with rocks and boards. When they emerged from their burrows in the morning, those little suckers would all be trapped under the net and we could stomp or spray them with ease, then move the net to a new location the next night!

Need I say that not a single one was caught in the net? There is no logical explanation, but the net was empty, and so were the burrows.

So, here’s how we initially won the war; we stopped mowing the lawn. Let me repeat: we stopped mowing the lawn. I had read that they burrow in short, manicured grass. Could it be that simple? Not a single suggestion on the internet had hinted at this as a solution, but about four years ago, after the 4th of July weekend, we told our mowers to stop mowing until further notice.

The wasps hatched out about July 12th, as usual, but this time into a messy lawn, which got increasingly inhospitable as the weeks went by.

When it was time for the wasps to mate and lay their eggs, they hovered, looking for burrowing locations. They need an unimpeded flight path as they approach with a cicada, and by this time we had shin high grass and thick clumps of dandelion. Many of the wasps seemed to land and fly away, land and fly away.

Fingers crossed, we resumed mowing in the third week of August, when the nesting activity was over and that year’s adult wasps had disappeared.

The next summer, they were much reduced in number. We repeated the process four years in a row, and they were gone. After a ten-year struggle, we had NO cicada killer wasps. Sadly, our neighbors to the east had hundreds.

So here’s how we lost the war; we told our neighbors to stop mowing their lawn, which they did, and we got complacent. We didn’t stop mowing early enough in July and once we did stop, there was a drought so the grass hardly grew. So once the neighbor’s lawn became inhospitable, our started looking mighty good again.

Last summer we had so many I caught five with one swoop of the butterfly net. We’re on it. This year we and our neighbors to the east will present a united front and the problem will move to the next neighbor. And there was one more idea on the internet; we now have a hundred small, clear plastic drink cups to put over the burrows in the evening.

So, here’s an idea; if all of Gardiner stops mowing for six weeks after the 4th of July each year, Pine Bush may suddenly have a cicada killer problem.

Shall we give it a try? We’re sorry Pine Bush, but all’s fair in love and the cicada kller wars.