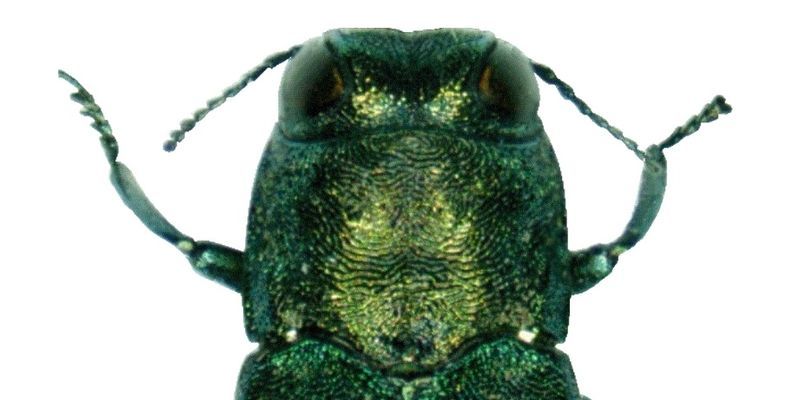 Driving the roads around Gardiner and New Paltz, you may have noticed a larger than usual number of dead or dying trees along the roadside.  You may be seeing victims of the Emerald Ash Borer (Agrilus plannipennus), an iridescent green beetle that has been spreading through the forests of eastern North America, killing all of the ash trees in its path.

The larvae of the beetle eat their way through the living tissues of the tree just below the bark before emerging as adults and flying off to mate and lay eggs in another ash tree.  After a few years of being infested, an ash trees weakens and dies.

The beetles likely first arrived in the Detroit area in the mid-1990s as an accidental stowaway in a shipment of goods from Asia and, by 2015, had spread to 27 states. The green beetles reached the Gardiner and New Paltz area in 2014. New Paltz highway superintendent Chris Marx remembers, “It was patchy at first, but we were quickly overrun—by now almost all of the ash trees you see along the roads are dead or dying.” 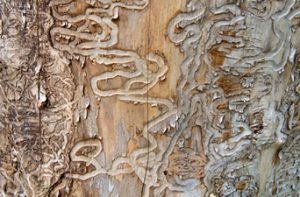 All of these dead ash trees are a headache for landowners and municipal governments. Gardiner highway superintendent Brian Stiscia says that the town is in the beginning phases of removing dead ashes that pose a hazard to roads, but that in the years to come the removal project will likely cost the town “quite a bit of money”.  “We did an expensive campaign in the fall [of removing ashes] and we barely put a dent in it,” Stiscia said. Municipal governments in the United States are estimated to spend a total of $850 million per year dealing with the ash borer, and the total cost in this country is anticipated to be $12.7 billion.

The ash borer and other invasive forest pests are a byproduct of global trade—they often inadvertently hitch rides between countries and continents in wood packing material (such as the crates used to ship goods on container ships) or in live nursery plants. It is only years later when they are already well established that their presence is noticed, and by then controlling their spread is difficult.

The reason these foreign pests are so devastating is that our native trees do not have any defenses against them.  In contrast, the ash species living in Asia are not killed by the ash borer because they have evolved resistance to the beetle over a long period of time.  “Our native ash trees are 100% susceptible,” said Dr. Gary Lovett, a senior scientist at the Cary Institute of Ecosystem Studies in Millbrook, New York, and a leading expert on the ash borer and other invasive forest pests.  He does, however, point out that the problem goes both ways, and trees in Asia and elsewhere are suffering from invasive pests from our country. Ash trees are not the only species at risk:  in the last century; the American Chestnut and American Elm were decimated by invasive pests, and many other pests have arrived and are spreading.

One of several growing concerns for upstate New York forests is the Asian long-horned beetle, whose preferred food is maples.  New York state has more invasive forest pests than any other state (62), and the lower Hudson Valley has the highest density of forest pests in the country.  “The people reading this article are living at ground zero for this problem,” said Lovett.

The ash trees are already in serious trouble, but Lovett emphasizes there are things we can do as private citizens to prevent the arrival and spread of the next forest pest.  First, don’t transport firewood out of your local area; one of the main ways that pests spread is by hitching rides in firewood. Second, do not buy imported nursery plants – try to ensure that the houseplants and landscaping plants you buy are native-grown (and ideally native to this area).  And third, Lovett urges, “Call your congressman and tell them your ash trees are dying and you want them to do something about it!”  The way to stop the problem, says Lovett, is inspections at ports and other points of entry to catch foreign pests before they come in, but the federal government “needs to think it’s a problem first.”

And if you have ash trees on your property and you’re wondering what to do? If they aren’t already showing signs of infestation, they likely will be soon. Telltale signs of an infested ash tree include dying branches in the upper parts of the tree, shoots sprouting from lower on the trunk, a trunk that has a characteristic “flecked” appearance from woodpeckers prying off the bark to eat the larvae, and small D-shaped holes in the trunk from which the adult beetles emerge.

Dwight Bayne of Mountain Tree Care in New Paltz notes that if you have a valuable ash tree on your property that is still healthy, it may be possible to keep it healthy by hiring a certified arborist to treat it at recurring intervals with a chemical toxic to the larvae. Otherwise, as the tree becomes weaker and dies you should take it down if it threatens to fall on your house, preferably before it dies so that if an arborist needs to climb the tree they can do so safely.  But if your infested ashes are away from structures and not at risk of falling on anyone, you can just let them die and stay standing, as they are a boon to woodpeckers and bird species that nest in dead trees.