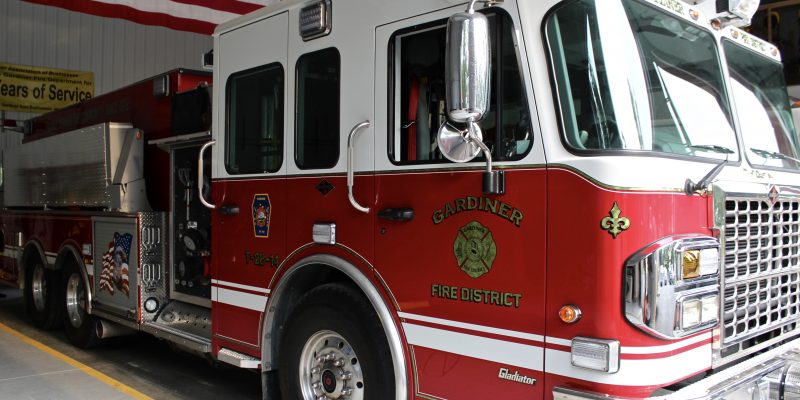 In 2016, the volunteer Gardiner Fire Department and Emergency Medical Services (EMS) combined went out on 465 calls. Gardiner Fire Commissioner Luke Lyons says, “Spring and fall we have a lot of chimney fires, summertime motorcycle, sky diving and climbing accidents. In between,  you have the automatic alarms. ”

Currently, there are 50 volunteer firefighters and EMS technicians in Gardiner, but not all of them can answer a particular call; each firefighter must pass a New York State mandated test in order to receive different certifications.  For example, there’s a certificate authorizing entry to a house fire; one permitting a jump out a second story window of a house on fire, etc.

The Gardiner Fire District is responsible for the organization and appointment of members to the Fire Department. For clarity, a Fire District and a Fire Department are not the same thing. Fire districts are autonomous public corporations, independent from the towns in which they are located, established to provide fire protection and respond to other types of emergencies. They are usually governed by an elected board of fire commissioners and have the authority to levy taxes and incur debt generally without approval from any other governmental entity.

In addition, a fire district owns just about everything in the fire house: trucks, EMS vehicles, gear and equipment.

The Gardiner Fire Department is a not-for-profit volunteer fire company incorporated in 1952 with firehouses located at 100 Main Street and Route 44-55 (Minnewaska Trail).  It owns the firehouses and maintains these properties with funds raised through various fundraising activities and by contributions from town residents and the Fire District. In addition, the Fire District pays rent to the Fire Department  for the firehouses.

Department Chief Dave Bailin meets monthly with the Fire District’s board of commissioners, reporting on gear and other supplies. Fire Commissioner Luke Lyons explains, “We have a priority list. It’s a constant interaction between the Chief and the Commissioners. [Bailin] presents us with his wish list and we see where we can accommodate his needs.  And it’s prioritized.  We don’t compromise safety because of money. Haven’t had too.”

The Fire District uses this information to help formulate its annual budget, which is presented to the Town Board, resulting in a line on our annual tax bills.  Chief Bailin says the wish list is based on hard facts and formulas. “All the gear here only has a ten year life from the date of manufacture…. That’s NFPA (National Fire Protection Association),” he explains, “which means we buy a certain number a year to replace old ones.  If this gear is 11 years old and a guy gets hurt in it, we can get in a lot of trouble.  It’s the same with the fire trucks, we’re required to do a certain amount of testing with our ladders and hose….”

In 2012, there was controversy surrounding the Gardiner Fire District’s purchase of a new pumper truck at a cost of $500,000. It was the Department’s position that they needed a truck with a larger holding capacity; there are no fire hydrants in the Gardiner, so firefighters ‘dip’ into one of eight naturally occurring water supplies (there are 12 additional seasonal sources)  to fill the truck’s tanks. The Department now has a total of seven trucks: two engines, two tankers, one rescue, one ambulance and one brush truck.

There is a decline in the number of volunteer firefighters statewide. A June 2015 paper prepared by the NY State Professional Firefighters Association states that the two main reasons are time demands and socio-economic trends, including the need to commute to work.  Bailin offered another perspective: “The problem is a lot of people join based on what they want it to be.  It says volunteer, but this is a tough job. It’s a special kind of person who does really well in this atmosphere,” says Lyons. (To fill out an application to become a volunteer firefighter in Gardiner go to www.gardinerfireandrescue.org.)

After interviewing members of the department, I was struck by their level of commitment and seriousness of purpose.  Lyons said, ‘When you get done with all the nuts and bolts and dollars and cents, there’s a person inside that…[suit].  And there’s a lot of tradition attached to that person.“ Bailin added, “if you call 911 you are getting a volunteer service but it is as professional as they come.  We have a very well-trained fire department.”

I showed up to the interview simply curious.  I  walked away with a profound sense of respect and appreciation.