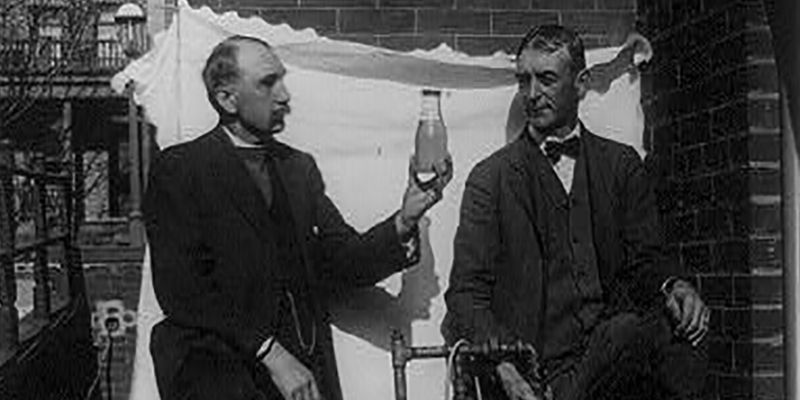 The Whirl of Apple Jack

Recently there has been renewed interest in not only apple cider, but also hard cider. These beverages enjoy a long history in the American Colonies. This holds especially true in the apple growing region of the Hudson Valley. However, most people do not know about a drink variously nick-named New Jersey Lightning, Hedge Hog Quills and other things;  better known as just Apple Jack.

This drink was popular in Gardiner, and it just might have been the famous “Liquid Dynamite” served at the Commercial House once located in the Hamlet of Wallkill. Many drank it because it was readily available as well as being cheap, and the high alcohol content sometimes created problems for those who imbibed. Gardiner Apple jack was sought because of its potency. This drink created a public nuisance for the Town of Gardiner, especially when individuals clearly could not handle its potency.

One Gardiner Justice, Charles B. Wright, was kept busy with the ill effects of the drink. In 1909, Wright sentenced William Tracy of Gardiner to “10 days in jail for drinking too much joy water.” One local newspaper, in 1911, referred to the growing numbers incarcerated, as “the little colony of Gardiner citizens who are visiting at the county jail….” Usually the sentence ranged from 15 to 20 days. However some individuals were handed 30 to 60 day sentences.

Aqueduct laborers also discovered the destructiveness of Apple Jack; a large number spent their wages on it. One early example was George Cenenysk. He was sentenced to 30 days in the county jail. The newspaper reported that Cenenysk “was unused to the effects of Gardiner Applejack.” Still another worker, Patrick Nagle, was so inebriated that he had to be carried into the court by two aqueduct policemen. He was sentenced, and then carried back to his cell. Reporters wrote that sometimes workers were passed out in the gutter in town.

In an effort to rein in this scourge descending on Gardiner, stills were routinely raided.  They were seized by local officials as well as by Internal Revenue Agents. A distiller named Terry had his still raided for failing to affix the proper tax stamp. His Apple Jack was seized, to be sold at auction in Newburgh. Some of the stills were not only destroyed, but their contents as well.

Probably to the relief of local law enforcement and citizens, Apple Jack lost its popularity as locals started to lose their taste for the strong drink. In addition, beer increased in popularity. In nearby Orange County, one paper reported in 1889, “1/3 as much apple whiskey is made in Orange County as there was twenty years ago and many distillers which once did a large business have been permanently closed.”

By the mid-1900s Apple Jack started to fade from the newspapers. Today, there is a renewed interest in hard cider with micro ciders being brought back into production. Perhaps this  will also create a resurgence of interest in Apple Jack. While we hope that Apple Jack will make a comeback, we also hope some of the problems once associated with it don’t.