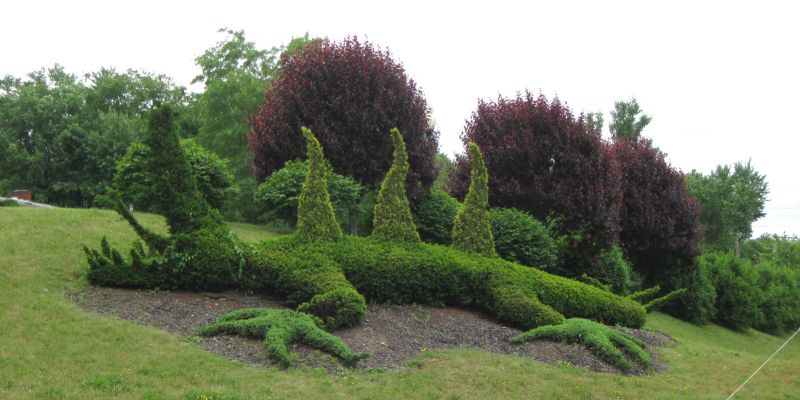 Am I the only one who has noticed that there is a dragon in the middle of Gardiner?  Where did it come from?  When did it get here, and why is it here?  In particular I wanted to find out just how long the dragon really is. With a curled tail, it’s 34 feet long; at full length, maybe 36 feet long. I’m guessing here, because, remembering the Hogwarts School motto, Draco dormiens nunquam titillandus (never tickle a sleeping dragon) no way was I going to uncurl the tail to measure.

When Ralph and Keith Buesing closed their nursery in New City, NY they were left with a dragon Keith had formed on the nursery grounds. Ireland Corners Garage kindly offered a grassy slope with ample prowling room. So in the midst of a December 2002 snow storm, the dragon was transplanted to its present location at the intersection of Routes 44/55 and 208 where it continues to thrive under the care and attention of Keith Buesing and Coral Acres Nursery in Gardiner.

Coral Acres is no longer a nursery, but specializes in landscape design and installation, including topiary. That’s the training and trimming of live plants into clearly defined shapes.

“Being around plants, born and raised in a nursery, planting and maintaining them, you get an appreciation of plants,” Keith says. “Trimming a plant after a year’s growth may suggest another shape.”

Topiaries are normally constructed of evergreens with small, dense leaves. The variety of such plants allows the topiary artist to create larger figures in a variety of shades and textures of green. The darker green body and head of the Gardiner dragon are constructed of taxus, a type of yew. The tall yellow green dorsal spikes are of golden arborvitae and the huge, taloned feet are of lighter green parson’s juniper.

Lately, Keith has gotten more interested in the human form and has constructed an 8 foot tall woman in front of The Bicycle Rack, next to The Bakery in New Paltz. She appears to be sunbathing, guarded by a considerably smaller dragon than Gardiner’s own.

Early cartographers would frequently fill uncharted spaces on their maps with dragons and similar creatures. Inscribed on the eastern coast of Asia on the Lenox Globe (ca. 1503-07) is HC SVNT DRACONES (hic sunt dracones) or “here are dragons.” We’re still investigating how that became, in common parlance, “there be dragons” . . . which is also the title of a 2011 film centered on the Spanish Civil War. It was so titled, according to director Roland Joffé, “Because when I started this project, I realized I’d be going off the map a bit.”

I, for one, think Gardiner’s dragon is just another thing that puts us on the map.