When they start peering in the windows like the family dog looking for dinner it makes you sit up and take notice (see the back page to further scare the pants off yourself). Bear populations here used to be concentrated in certain areas like the Catskills, Adirondacks and Alleghenies, but according to the Department of Environmental Conservation (DEC), those populations are now moving and merging, and there’s no shortage of evidence that they’ve found plenty of appealing real estate in Gardiner. 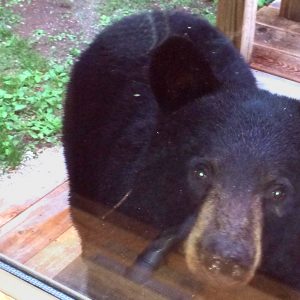 Guess who’s coming to dinner? A visitor on Campfire Road in Gardiner. Photo: Paul Muessig. Visit our Facebook page to see more and post your own bear pictures.

My own household, on the eastern end of McKinstry Road, has gone from one bear sighting in 13 years to six or seven in the past three.  A family on Forest Glen Road had two encounters about a year ago—the first since they moved there in 1981, on Guilford Road, after 15 bear-free years a resident had now sees them regularly in the field behind the house, and there were two sightings near the Rail Trail off Sand Hill Road last summer.

Even along the Ridge, where we’d expect to see some bears, things have clearly changed. The Muessig family, who took the picture on page 1, has lived on the southern flanks of the Ridge since 1988 and never saw bears until about five or six years ago. Now, Kathy Muessig says, “When they run out of food on the mountain, they  regularly come down for garbage night, when everyone puts out their cans for collection the next day. This is the first time a bear has ventured onto the deck and looked in the window though.” And a family off Route 299, whose property abuts Preserve land, reports that they have seen more bears this past summer than the six years before that. In one of the earliest of these sightings, they tried to reassure their ten year old niece that it was a deer she must have seen running away when she went out in the back yard to play. When they reviewed the video they had set up in the garden, there were, in fact, three bears.

So what’s going on? According to DEC Wildlife Biologist Matt Merchant in the DEC’s New Paltz Office, reports fluctuate significantly from year to year, but there has definitely been an increase in nuisance bear incidents, especially in the spring and early summer. At that time, they’ve come out of hibernation and are looking for food. Breeding season-related movements and activities also come into play, and there’s a dispersal of young bears looking for their own territory.

New Jersey’s wildlife management policies are a contributing factor in that NJ had no bear hunt for many years and now has only a minimal one. And good nutrition, from natural foods and human-generated food sources, have also been shown to increase the reproductive rates of bears; females become sexually mature earlier (2-3 instead of 3-4 years old), have larger litters (3-4 more often than 2-3), and have increased survival rates, all of which add to the increase in population.

Gardiner residents are wise to cut down on that food supply; the Muessigs do not put their garbage out the night before anymore; the family off Route 299 has purchased a $300 bear-proof garbage can, and resident Susan Lehrer, who ran into a bear while out for a run near Guilford Schoolhouse Road, has an even better idea. “I take mine to the dump directly from the kitchen.  No outdoor trash can for me,” she says.

Many of us have, sadly, also stopped feeding the birds, either  completely, or  only feeding in the dead of winter when bears are in hibernation.

State Trooper Mike Gagliardi has heard of bear sightings through the rumor mill but has not yet seen any himself or had any bear-related call outs, so bears are not exactly strolling into the Village Market for a coffee yet. And the DEC is on the case.  In New York, they manage animal populations through hunting programs. Matt Merchant says, “In 2014, we added 16 days in September, in all the areas in DEC’s Region 3 West of the Hudson River and in Region 4.

Hunters can use any legal implement for the unit they are hunting (crossbow, bow, muzzleloader, or firearm).” The new early season was put in place to try to bring the population size down and hopefully reduce the number of nuisance issues. The effect of the early season will be evaluated after five years. He adds that the new season has generated a lot of interest from hunters and the first year resulted in relatively good harvest numbers compared to the other big game seasons (Archery and Firearm seasons).

The DEC implemented the early season because the “the social carrying capacity” seemed to have been reaching its upper limit here, and if it doesn’t bring the population down to an acceptable level, other methods of harvest may be looked at for consideration. (Any proposals would go out for public comment and input before being implemented.)

Not everyone is sorry the bears have arrived. Resident Jonathan Lozier, whose bee hives were raided twice says, “I’m glad they’re here. It reminds us that we live in a natural ecosystem, and the bear didn’t do anything wrong,” Lozier said. “It was no different from me going  to Hannaford to buy dinner.” He adds that while he was upset about the damage to his hives and colony of bees, he was more annoyed with himself; “We have to educate ourselves, but also educate the bears.” He did so with an electric fence around the hives. It only took one more visit for the bear to understand that this was not a safe place to get food.

For more information about learning to live with bears, go to: www.dec.ny.gov/docs/wildlife_pdf/livingwithbears.pdf  and  http://www.dec.ny.gov/animals/6960.html.