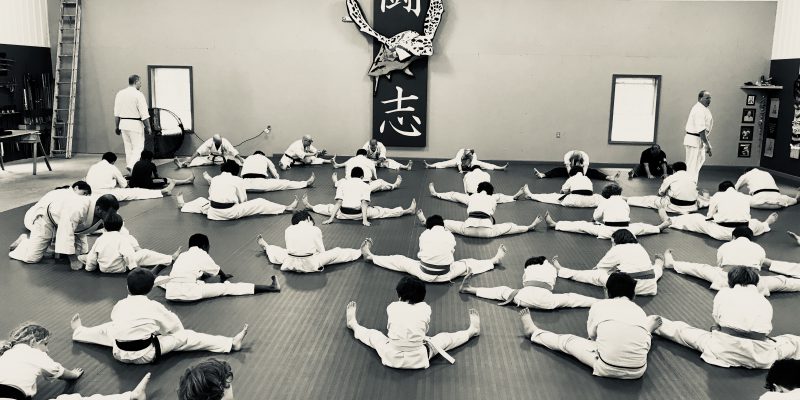 The True Essence of a Mindful Warrior

A Sea Turtle? When entering Fighting Spirit Karate Studio (FSK) on Steve’s Lane, the large 3-D sea turtle swimming out of the wall immediately draws your attention. Gazing around the light, spacious studio, one sees punching bags, body shields, racks of polished wood sticks, an expansive, padded floor mat, and a metal gong, among other things. Pretty much what one would expect to see in a karate school…but that sea turtle…how is this different from other karate schools?

A class takes the floor…adults, not children. The class schedule reflects a wide range of students—from kids to teens to adults, including those with gray hair—and a wide range of offerings including Judo, Brazilian Jiu-Jitsu, Krav Maga, Muay Thai as well as fitness classes that include cardio kickboxing, bag training and cardio-boost.There is even a family training class once a month, and body types are also diverse, from the expected to the unexpected.

Today, Shidoshi and FSK owner Sean Schenker (Shidoshi is an honorary title designating Master Teacher), leads the class in Kyokushin-influenced Karate. The atmosphere is one of focused attention and respect, but a sense of camaraderie is there as well. As newly minted Black Belt, Stefan Bolz, explains, “The biggest difference at FSK is that there is no ego. There isn’t that gap between the belt ranks I have experienced in other dojos. Everything is very low key in an ego sense but high quality training in many different directions with the martial arts.”

Stefan has been training since FSK first opened in a small space in New Paltz in 2012, before moving to Gardiner last summer. Scott Berra, another adult student and father of two young children, worked it out with his family to train one day per week, which has grown to three and then four days per week.

Sensei (Teacher) David Kalish says, “I’m a ‘lifer,’ having trained in martial arts for more than 30 years. Every martial arts school I’ve been to gets its flavor from the instructor. Sean sees that there are lots of martial arts systems and styles but they are all interconnected. He welcomes everyone and knows that instructors from other styles bring worthwhile items to the table. And he personally runs incredible, challenging and exciting classes.”

Your attention is drawn back to the mat by the occasional “splat” of pad on flesh. The students are sparring with each other, and actually seem to be enjoying being hit. Younger students with higher ranking belts give pointers to older students; older teens and gray haired adults, women and men, all seriously engage in the exercise together. Rebecca Haskel, an adult student who returned to training in her mid-30s, says, “The training environment that Shidoshi Sean Schenker has created is about making sure everyone is comfortable. Everyone is respectful of each other’s wishes. In particular with sparring, if you wish contact to be harder, it can be; if you wish it to be lighter, it will be. The expectations are that you push yourself to improve, but never at the expense of injury.”

Sean Schenker explains, “Sparring is an integral part of the training. It allows for instinct, reaction, analysis, interpretation and improvisation ‘under the gun’ so to speak, and while there is a reality based application to this in real world self defense, I believe the training is much more a prep for daily life—the constant curve-balls and surprises and twists and turns as we wind the road of life. Sparring helps us rely on ourselves in heated moments of fear, self-doubt and anxiety…and it helps us find strengths and strategies within to allow an inner sense of triumph, win or lose.”

Now, you hear the ring of finger cymbals. The students kneel in order of rank, red faced and breathing hard, eyes closed. In front are Shidoshi and the other instructors and the ever present Sea Turtle. All repeat FSK creed; “I come to you with only my empty hands. My karate. Should I be forced to defend myself in a matter of right or wrong, then here are my weapons. My empty hands. My karate.” And the class is over.

So the Sea Turtle? It represents Defense: Using its shell, it has found an efficient way of self-defense allowing for survival and longevity. Slow: The path that leads towards fruitful self-actualization is slow. Wise: Around since the age of dinosaurs, survival, adaptation and peaceful existence embody the true essence of a mindful warrior.