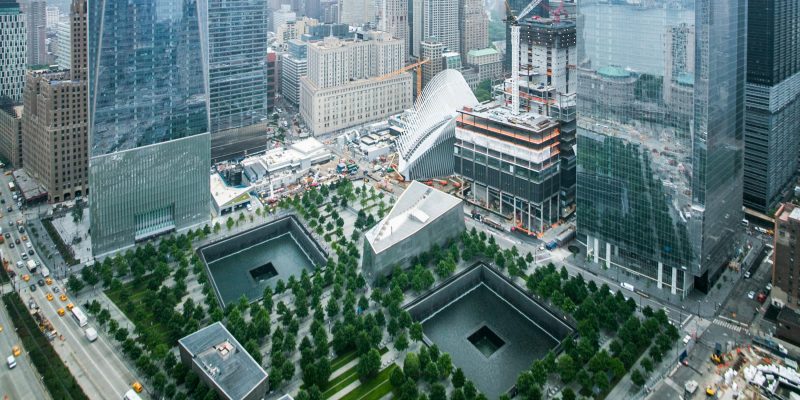 The Fall, 2010, issue The Gardiner Gazette  reported that Kurt Wulfmeyer and Chris Powers had been awarded the contract to build the parapets at  The National Memorial at the World Trade Center. The fabrication and design execution took place in their shop, KC Fabrications, on Steve’s Lane, here in Gardiner.

It took Kurt and Chris nine months to fabricate and install the monument on the site of the old World Trade Center; the memorial opened on  September 11, 2011. Their design is bronze, about ½” thick, made of 10-foot long panels. 2,983 names of the people who perished in the terrorist attacks of September 11, 2001 and February 26th, 1993 are cut into the bronze parapets around the perimeter of the two pools.   The victims’ families were involved in the process, and visited the KC Foundry as different stages of the monument were completed.  Architect Michael Arad selected the black patina created by artist Christine Corday (Chris Powers’ wife) for the finish of the bronze parapets which carry the nearly 3,000 victims’ names. The solution was applied using a brush and a propane torch to every single panel of the bronze parapet. “Every name has run under the palm of my hand,” Corday said. “Each name here is a life, and that’s never been lost on anyone that’s worked on this project.”

Public reaction surprised Chris and Kurt.  Not only do the people touch them, they rub them, and fling themselves on them. Children sit on them. Before the memorial was finished, people expressed much pain. “Now it’s like a weight has been lifted,” Kurt says. “You can see the difference. It is a new day. We feel like we have really helped people.” The first week, everything you can imagine was left behind at the memorial; piles of notes, Catholic Mass cards and photos. “Now, they put in tons of coins…like a wishing well,” says Chris. “It is a tombstone; before they had nothing but a pit.” Mementos left behind are treated as artifacts, but the constant touching of the carved names causes wear and damages the patina. This fact led KC Fabrications to a maintenance contract. They have between three and five people who—during the night, to be respectful of the people who visit during the day—work in shifts to reapply the patina.

KC Fabrications has evolved to a new level though this project. Kurt says “When we are seeking new projects there is no need to explain yourself anymore.  They have respect for what you did.”  Chris smiled. “We have always had a lot of work.  Now we have more work and less sleep.”  Both have a great sense of pride and accomplishment.  You can see their other projects on their web site, www.kcfabrications.com.