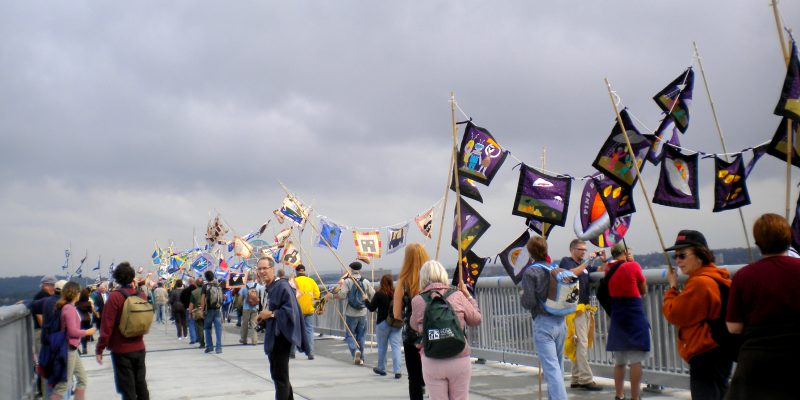 Walking Across The Hudson: An Elevated Experience

If you haven’t yet visited the Walkway Over the Hudson, spring is a great time to do so. For the four years since the grand opening in October, 2009, The Walkway has been providing panoramic views for pedestrians, bicyclists, dog walkers, bird watchers, train watchers, river traffic watchers, and people with disabilities. The bridge is 1.28 miles long; the longest, elevated pedestrian bridge in the world.

The Poughkeepsie-Highland Railroad Bridge opened in 1888 to link New York and New England to an extensive, nationwide railway network.  It  is said that at its peak of operation, 3,500 train cars crossed daily. During World War II the bridge carried troops heading overseas.  All activity came to an end when the tracks were severely damaged by fire in 1974, after which the almost century old bridge lay idle while visionaries began pursuing their dream of a pedestrian walkway. In 1992 Walkway Over the Hudson assumed ownership and the remarkable transformation began.

In 2009, a small group of enthusiastic banner-bearers  from Gardiner joined a parade of banner bearers from other towns up and down the Hudson in joyful if drizzly celebration of our new, very special state park. We paraded across the river and back, passing and greeting other bearers along the way. Sections of our banner, designed by local artist, Meadow, were displayed in our library afterwards. Plans for 2013 involve construction of a waterfront elevator and connection to the Dutchess Rail Trail as well as two new volunteer pavilions.

Today the Walkway is open year round, from 7 am to sunset. Many special events are held there, including the annual Mid Hudson Road Runners Treetops to Rooftops on June 15, a Fireworks Spectacular on July 4, and monthly moonwalks for members. The park has interpretive signs and a cell phone tour. There are two entrances, one on either side of the Hudson River. Parking on the west side of the river is along the north side of Haviland Road off 9W in Highland. On the east side there is a parking lot on Route 9G/Parker Avenue in Poughkeepsie.   For more details or to become a member, visit www.walkway.org.

The Walkway is always looking for volunteers, but so far, there have been none from Gardiner. Training workshops are presented seasonally. Anyone interested in becoming a “volunteer ambassador” may contact Suzanne  O’Neil, 845-454-9646 or soneil@walkway.org; maybe one of our readers will be Gardiner’s first!