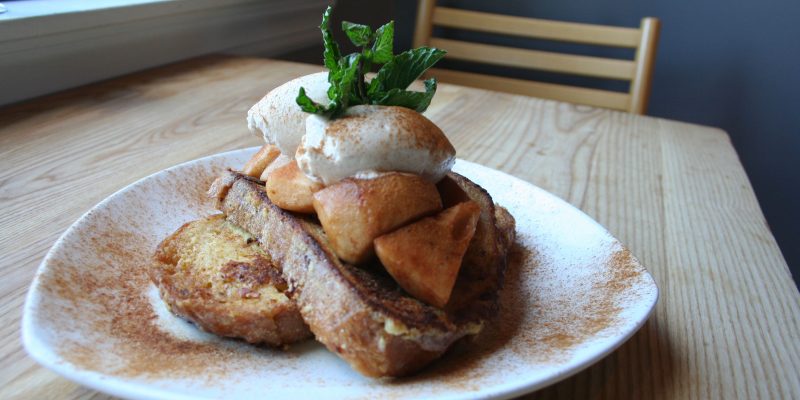 It was a tough job, but somebody had to do it. I recently tried both the “Strawberries and Cream” French Toast ($8.50) and the intriguing  “Caramelized Banana and Bacon” French Toast ($9.00) at Café Mio.  I do have some self-respect so, no, I did not order them in the same visit.

Both versions of the toast feature two large, thick slices of dense, good-quality bread with deeply browned, crisp edges that contrast beautifully with the creamy, eggy centers.  The Strawberries and Cream variation is rich but light, mounded generously with sweet, ripe strawberries (which mutate into baked apples, pears or other fruit depending on the season), dusted with powdered sugar and served with maple syrup.  It’s a big serving but I happily finished mine.  My companion struggled.

The Banana and Bacon version features bananas fried with sugar until the sugar melts and turns into a rich caramel. With two slices of French toast, two whole bananas and four slices of bacon this was, while absolutely delicious, HUGE.  I have been (lovingly) accused of having the eating capacity of four young, male gorillas but banana and bacon French toast got the better even of me.