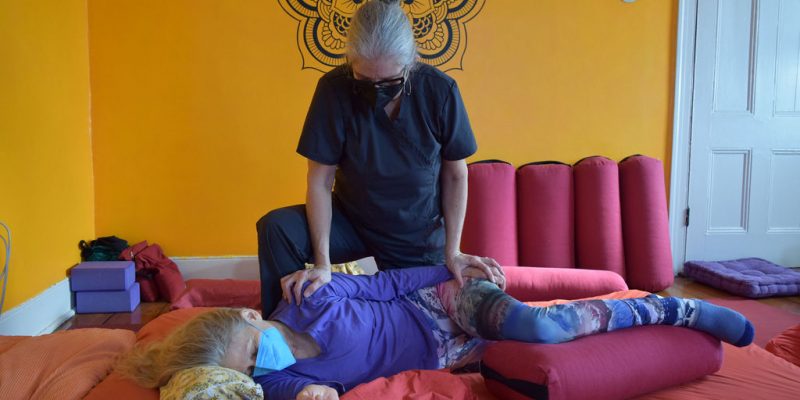 In the heart of our hamlet there is a treasure tucked right in plain sight next to the post office, Yoga Wellness Bodywork. There, the soft saffron-colored walls, gentle music, and iridescent Thai bowls welcome one into the peaceful, healing space. The owner, Sharon Paddock, started the business around 9 years ago when she was living in Rhode Island. So, it was our good fortune that, after being weekenders in Gardiner for 20 years, Sharon and her husband decided to move their business here in 2017 and make Gardiner their permanent home. “But why Thai yoga massage?”, I asked. Apparently, Sharon discovered how effective Thai bodywork was for her own aches and pains years ago, and she fell in love with it. For the uninitiated, Thai massage is an ancient bodywork modality handed down from one teacher to the next; Sharon studied the “Northern style” of Thai bodywork with Ed Cardinal of Sol Wellness who had studied, in Thailand, under Ajarn Pichest, a world-renowned Thai massage guru. For two years, Sharon studied his style, methods, and techniques which have influenced and inspired many contemporary practitioners in his country and abroad. When asked how her other trainings in various yoga modalities affect how she practices Thai massage, Sharon said, “I studied Pranotthon Yoga training at All That Matters school in Rhode Island, and various other restorative and partner yoga trainings, all of which have greatly influenced my personal style of Thai bodywork.”

Some may wonder, “What is Thai massage?” and “How does Northern-style differ from Southern-style?” Well firstly, Thai massage is an ancient mode of healing that was used in the time of Buddha, who existed sometime around the 6th century B.C., and the Thai people regard Jivaka, Buddha’s physician, as the creator of Thai massage and medicine. Over time, this ancient bodywork was passed down by Buddhist monks and Thai families. The techniques used in Thai bodywork are related to yoga because both systems were spread along the Silk Road which extended through the ancient world from China through India, Asia Minor, up throughout Mesopotamia, to Egypt, the African continent, Greece, Rome, and Britain. As to the difference between “Northern” and “Southern” styles, the Northern style is slower and gentler.

When asked, “What makes Thai bodywork, as a whole, unique?” Sharon explained, “It’s how the body is moved and stretched to help loosen muscles, relieve pain, and assist the body in healing itself, and it is performed with both practitioner and client fully clothed. This work also differs from other massage as it begins at the feet and finishes at the head, neck, and face. But what I think has influenced my work the most is identifying with my clients’ muscle and joint pain and how that can be released by bringing the body to a state of relaxation and of letting go.”

My personal experience there has been restorative. Sharon skillfully used gentle stretching, compression, and tractioning techniques to relieve muscle tension and pain. After my first Thai massage session, I felt lighter and experienced more range of movement than I’d experienced for quite some time. Sharon expresses her feelings about her work simply. “It is a dream for me to do this because it helps people who are in pain to feel well in their bodies.” For more info: yogawellnessbodywork.com, or call/text (845) 275-0330.