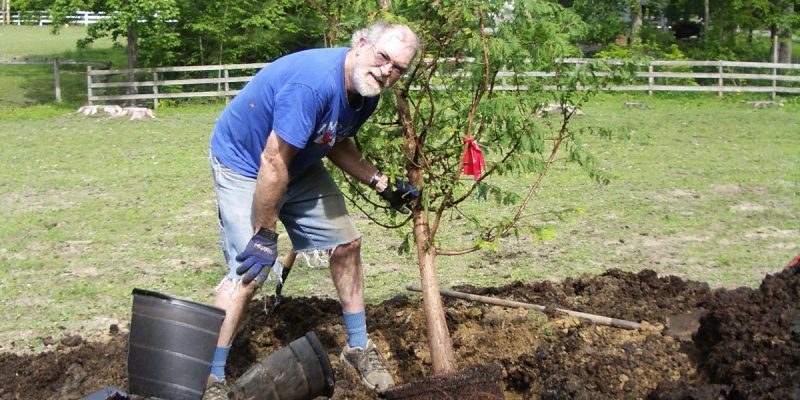 A Redwood In The Living Room

Americans are all tree-huggers at heart, and no one loves trees more than a forester, of which I am a retired one. Among my most favorite trees is the Dawn Redwood (Metasequoia glyptostroboides), a deciduous conifer not to be confused with the Coast Redwood (Sequoia sempervirens), found along the western slopes of the Sierras on the Pacific coast. The Dawn Redwood was presumed extinct for many years, until it was discovered, alive and well, in China in 1944. The species has remained essentially the same for 65 million years, and is sometimes called a “living fossil.” Brought to the United States, it likes the climate, grows well here, and makes a fine ornamental.

Imagine my delight when I spotted one in the back of the wonderful display in Adam’s Fairacre Farms’ Spring Flower Show this year. Standing nine feet tall, it provided a dominant backdrop for the many other plants in full bloom in the exhibit. After the show, I promptly purchased it.

Now, this was the end of February, and the tree was in full leaf. It could hardly be moved outdoors, with eight or more weeks of cold weather ahead, so I had no choice but to keep it in the living room of my log home which, fortunately, soars about 20 feet to the peak. It fit quite well, but the southern facing picture window allowed light only on the lower five feet or so, leaving the top in only pale light. Back to Adam’s for a  Sun Blaster horticulture light, which I hung on one of the beam supports and turned on each morning, leaving it on until late evening. Frequent watering of the redwood was also necessary; it needs a lot of moisture. Having a tall tree in the living room proved quite the conversation piece.

The weeks passed with much freezing weather outside, but warm and cozy in the house. The tree seemed fine, did not shed any leaves, and even added a few here and there. In mid-May, I moved the redwood outside to a sheltered corner for some acclimation. Soon thereafter, unseasonably hot weather arrived, and the tree experienced some heat stress on the leaves. Daily watering, and wetting down, seemed to help, but I worried about it a bit. I intended to delay planting until all danger of frost was past. 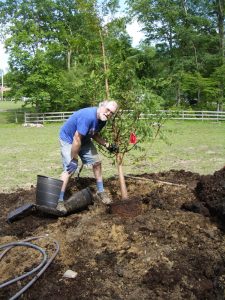 Finally, in late May, the planting process began. It’s a tree that likes good soil so I knew some modification of the typical “Shawangunk clay” was in order. With the posthole digger on the Kubota, I dug a series of holes two and a half feet deep, dropped some rocks and other rubble on the bottom, and filled the rest with our abundant, well processed barn mulch. Around those, I dug more holes, and filled them with more mulch. Finally, I added a six inch layer of mulch on top, to be held in place with rocks that would serve as a raised bed, providing better soil, and better drainage for the redwood.

Next, I hand-dug a planting hole and sliced the thick roots wrapping around in a circle on the root ball; if not done, they might eventually expand so much they would result in a sort of suicide by root girdling. The planting hole was well watered, the tree placed inside, and yet more mulch added to backfill the hole. Tamping  and watering more completed the job—but I was not done yet—the planting location, in full sun, was also in the middle of the horse pasture where, I had no doubt, the horses would reduce it to splinters in a matter of hours.  More post holes to dig, only four this time, and boards and metal fencing finally provided protection.

I have high hopes the Dawn Redwood will enjoy its new location, and grow vigorously in the years to come. It’s tall enough already to serve as a host for holiday lights this December-another joy trees provide to us who love them.